CBET 4937 & MPEC 2021-D113, issued on 2021, February 26, announce the discovery of an apparently asteroidal object (magnitude ~19) on CCD images taken on Feb. 12.6 UT with a 0.5-m f/2 Schmidt reflector at Haleakala, Hawaii, in the course of the "Asteroid Terrestrial-Impact Last Alert System" (ATLAS) search program. This object has been found to show cometary appearance by CCD astrometrists elsewhere after the object was posted on the Minor Planet Center's PCCP webpage due to its orbit. The new comet has been designated C/2021 C4 (ATLAS). 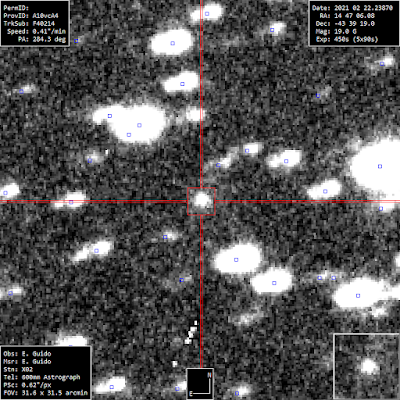 A recently (January 29, 2021) released film on the Netflix streaming platform, The Dig, tells the story of the 1939 excavation of Sutton Hoo, the exacavation of the great 7th-century Anglo-Saxon royal ship burial, considered one of the greatest archaeological discoveries in British history. It is a very interesting scientific and human story that will not fail to interest and attract many viewers. On the internet you can find accurate accounts of the events that occurred in Sutton Hoo and that saw as main protagonists local self-taught archaeologist-excavator Basil Brown and landowner Edith Pretty who hired him to tackle the large burial mounds at her rural estate in Sutton Hoo near Woodbridge.

For astronomy enthusiasts like the readers of this blog, one of the most interesting facts is certainly that the protagonist of this story, Basil Brown, was not only an archaeologist but also an amateur astronomer. Brown (22 January 1888 - 12 March 1977) joined the British Astronomical Association on 27 November 1918. Through NASA ADS it is possible to find and read some of his astronomical notes and reports published on the BAA Journal (JBAA).

For example he observed the transit of Mercury across the Sun on 7th May 1924 at Diss, Norfolk, with his only instrument a 2-inch (50mm) refractor (in the film you'll see Ralph Fiennes as Basil Brown carrying around a small telescope). His report to BAA was illustrated with four sketches: "the foregoing is an interesting illustration of the capability of a small telescope in the hands of an enthusiastic amateur".

He also observed meteors, the aurora and the zodiacal light. Basil was also searching for comets as reported in a Notes section of November 1921 of JBAA: "COMET NOTES. -- I have been glad to hear from Mr. Basil Brown that he has spent a good many hours in sweeping for comets. This should be one of the main objects of the sectional workers, especially when no known comets are within reach".

One of the facts that the viewer learns about while watching the movie The Dig, is that Mr. Brown is the author of an astronomy book, specifically a book on Atlases and Celestial Maps. In fact, while Mr. Brown never published any of his archaeological work, "the good reception which greeted his various astrono-mical papers led him to  publish in 1932 the book "Astronomical Atlases, Maps and Charts" a work which the publishers then described as  'filling an inexplicable gap in the literature'".

As it happens, I own a copy of the first edition of the book published in 1932 by Search Publishing Company in London (a reprint was published in 1966). and I think it's interesting to share here some photos of this beautiful book. (click on each image for a bigger version)

This is a book that should not be missing from the shelf of any fan of the history of astronomy (unfortunately it is quite difficult to find) and in particular of that fascinating branch that is the mapping of celestial things. The book, which as the subtitle says is a historical and general guide, is full of references and anecdotes about atlases, star charts and their authors.  As Mr. Brown points out in his introduction (a part is reproduced in the images below): "History is as essential to science as roots to a tree. Modern Astronomy may be likened to a great city built on foundations dating back so far as to be almost as old as the human race". There are also in the book illustrations of the most famous atlases and maps of antiquity. Some chapters are devoted to the mapping of the Moon, the Planets and the Sun.

There are several pages devoted to maps containing information and locations of comets of antiquity. The author provides a whole series of book titles that will help the comet scholar.

CBET 4929 & MPEC 2021-C16, issued on 2021, February 04, announce the discovery of a comet (magnitude ~19) in infrared images obtained during Jan. 22 UT with the Near-Earth Object Wide-field Infrared Survey Explorer (or NEOWISE; formerly the WISE earth-orbiting satellite). The new comet has been designated C/2021 B3 (NEOWISE). 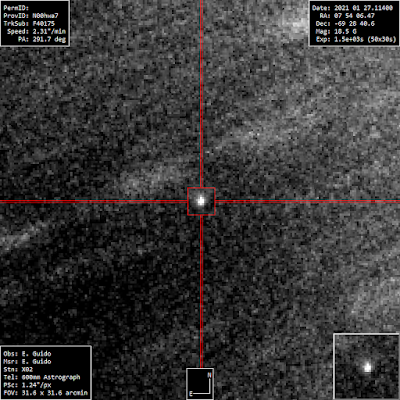 Email ThisBlogThis!Share to TwitterShare to FacebookShare to Pinterest
Etichette: C/2021 B3, C/2021 B3 (NEOWISE), New Comet

Stacking of 14 unfiltered exposure, 120 seconds each, obtained remotely on 2021, January 6.4 from H06 (iTelescope network, New Mexico) through a 0.43 m f/4.5 Reflector + CCD, shows that this object is a comet with a diffuse coma about 7" in diameter. 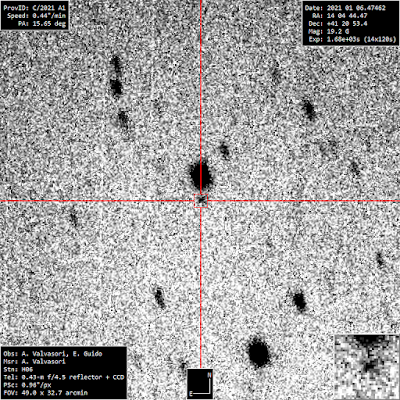 Comet C/2021 A1 (Leonard) could potentially become a naked-eye object. Below you can see a graph generated using the software Orbitas and showing the predicted magnitude (in red) versus the maximum height (for Northern Hemisphere). (as always with comets, the future magnitudes reported here are only indicative).

Below a graph showing the orbit diagram (made using the JPL Small-Body Database Browser) of comet C/2021 A1 (Leonard) and its position on December 18, 2021. 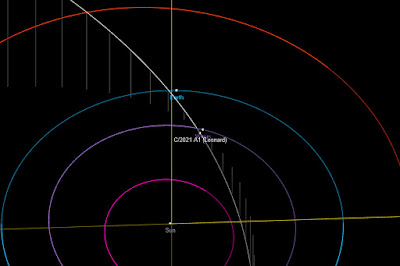 Email ThisBlogThis!Share to TwitterShare to FacebookShare to Pinterest
Etichette: C/2021 A1, C/2021 A1 (Leonard), New Comet

Below you can find a new selection (part I available here) of some objects for which we recently made follow-up observations at the "Osservatorio Salvatore di Giacomo, Agerola, ITALY" (MPC code L07; Observers E. Guido, A. Catapano, F. Coccia) while they still were on the NEOCP list. More details about the telescope, the  magnitude, number of images & exposition, asteroid speed & PA etc. are on the images. Click on each image for a bigger version. All the processing has been made with TYCHO software by D. Parrott. 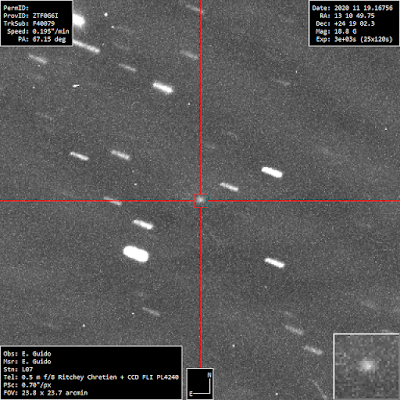 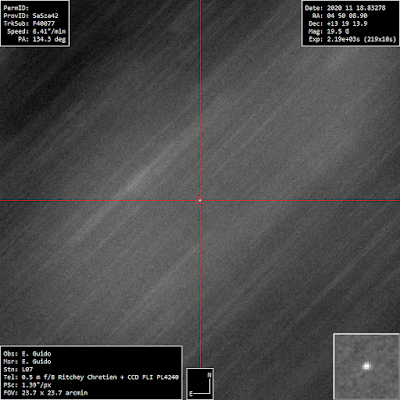 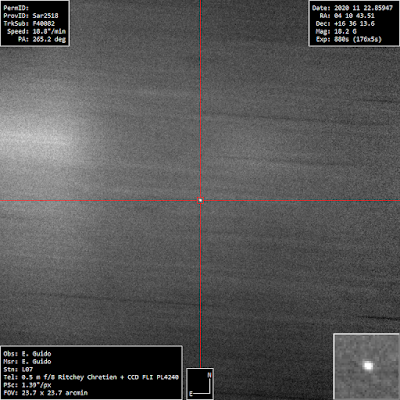 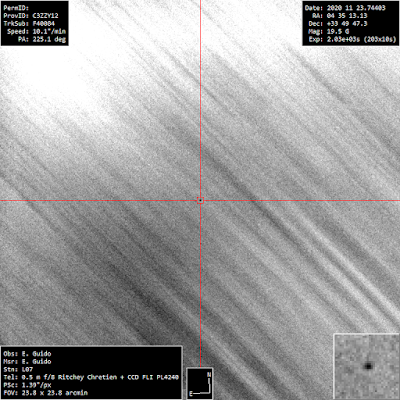 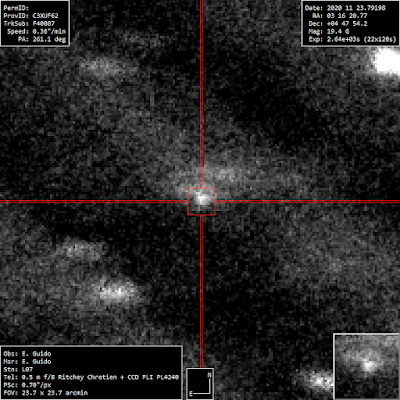 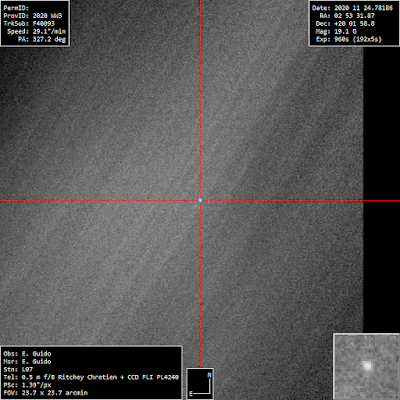 Below you can find a selection of some objects for which we recently made follow-up observations at the "Osservatorio Salvatore di Giacomo, Agerola, ITALY" (MPC code L07; Observers E. Guido, A. Catapano, F. Coccia) while they still were on the NEOCP list. More details about the telescope, the  magnitude, number of images & exposition, asteroid speed & PA etc. are on the images. Click on each image for a bigger version. All the processing has been made with TYCHO software by D. Parrott. 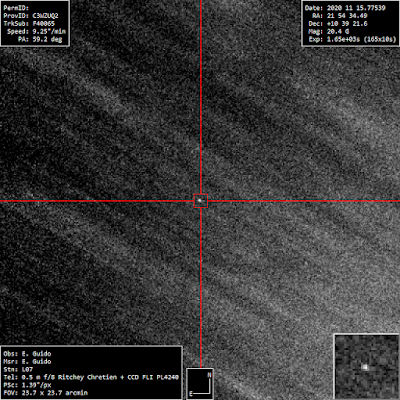 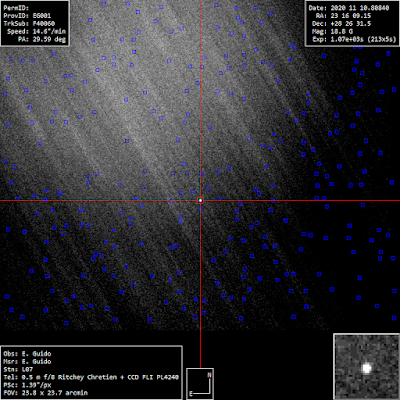 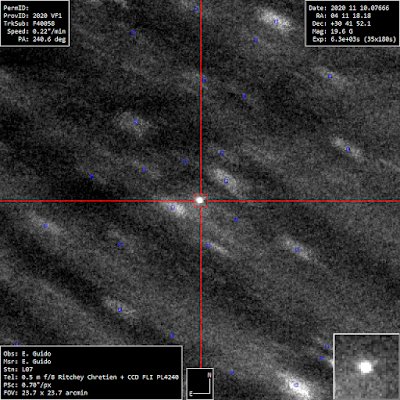 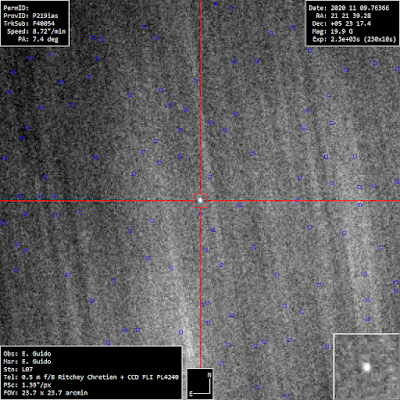 Our discovery image of this transient (click on it for a bigger version):

M31N 2008-12a is a remarkable recurrent Nova in the Andromeda Galaxy with the "shortest interoutburst time of any known recurrent nova. Since its discovery in December 2008 by two Japanese amateur astronomers, Koichi Nishiyama and Fujio Kabashima, a total of 13 subsequent outbursts have been observed. The mean time between observed eruptions (all observed between late August and December) is 364+/-52 days".