Following the posting on the Central Bureau's unconfirmed-objects webpage about a possible nova in Sco, on February 22.8, 2010 we performed some follow-up of this object remotely through through a 0.40-m, f/3.8 reflector + CCD, from GRAS Observatory (Moorook, Australia).

On our images we can confirm the presence of an optical counterpart with unfiltered CCD magnitude about 10.1 (UCAC2 Catalogue reference stars) at coordinates: 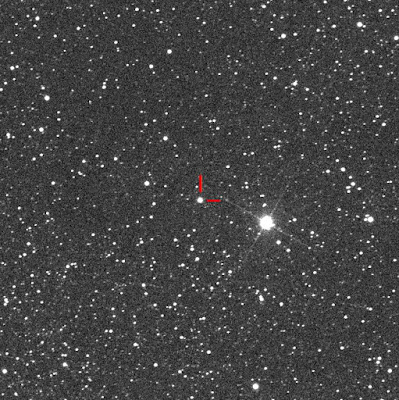 This is an animation showing a comparison between our image and thearchive DSS plate:

Spectroscopic observations are required to confirm the real nature of this transient.

According to Cbet No 2183 this transient in Scorpius has been discovered by Koichi Nishiyama and Fujio Kabashima (Japan) on two 40-s unfiltered CCD frames (limiting magnitude 12.7) taken around Feb. 20.857 UT using a 105-mm f/4 camera lens (+ SBIG STL6303E camera).

On Cbet 2186 (issued on February 23), K. Ayani (BAO) reported that a low-resolution spectrum (range 400-800 nm; resolution 0.5 nm at H-alpha) of the probable nova was obtained with the BAO 1-m telescope on Feb. 23.88 UT. This shows prominent H-alpha emission with P-Cyg absorption upon a red continuum. These features show that the new object is a "Fe II"-type nova.

The transient is officially NOVA SCORPII 2010.


by Ernesto Guido and Giovanni Sostero
Pubblicato da Team a 10:53 PM No comments:

On our images taken on February 20.5, 2010 through a 0.25-m, f/3,4 reflector +CCD, from GRAS Observatory (near Mayhill, NM), we can confirm the presence of an optical counterpart with unfiltered CCD magnitude about 9.4 (UCAC2 Catalogue reference stars) at coordinates: 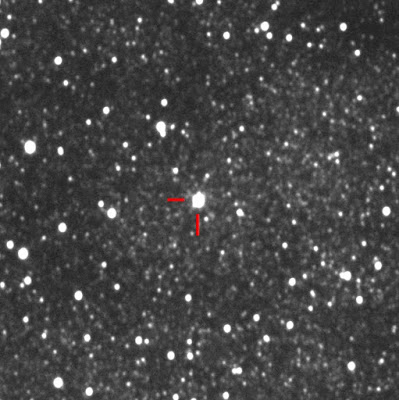 This is an animation showing a comparison between our image and the archive DSS plate:

On Vsnet mailing list Imamura-san (Okayama U. of Sci.) and Fujii-san have reported spectra of this object confirming it as a nova: 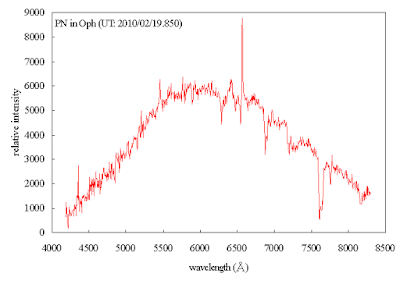 According to Taichi Kato "Halpha emission was accompanied by a P Cyg absorption (blue-shifted by1000 km/s). Balmer emission lines with P Cyg profiles (700 km/s for Halpha) and Fe II lines were visible."