Cbet nr.2922, issued on 2011, November 29, announces the discovery of a new comet (discovery magnitude 17.9) by Claudine Rinner on CCD images obtained on November 28, 2011 taken with a 0.5-m f/3 reflector located at the Oukaimeden Observatory near Marrakech, Morocco. The new comet has been designated P/2011 W2 (RINNER).

We performed some follow-up measurements of this object, while it was still on the neocp. Stacking of 14 unfiltered exposures, 120-sec each, obtained remotely, from the GRAS Observatory (near Mayhill, NM) on 2011, November 29.3, through a 0.25-m, f/3.4 reflector + CCD, shows that this object is a comet: diffuse coma nearly 15-arcsec in diameter. 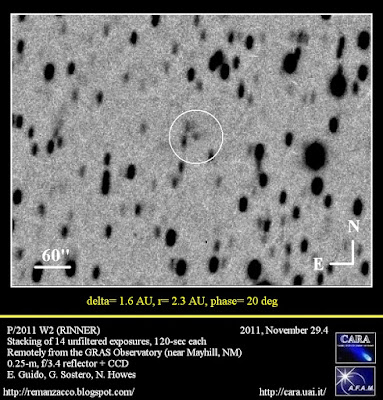 Congratulations to Claudine Rinner for this new amateur comet discovery!!

Cbet 2923, issued on 2011, November 30, reports that an apparently asteroidal object reported by the Spacewatch survey and designated 2010 UH55 by the Minor Planet Center last year, has been found to show cometary activity. H. Sato (Tokyo, Japan) first reported the appearance of a condensed coma of size 6"-8" on 2010 Nov. 17.4 UT. Sato's report remained unconfirmed until the past month, when he again found the object on 2011 Nov. 3.5 to show a cometary appearance. Other observers have confirmed the cometary nature of this object. The new designation is P/2010 UH55 (SPACEWATCH).

Prompted by an alert note of Dmitry Chestnov, we performed some follow-up about this object. Stacking of 5 R-filtered exposures, 40-sec each, obtained remotely, from the Haleakala-Faulkes Telescope North on 2011, November 28.6, through a 2.0-m f/10.0 Ritchey-Chretien + CCD, shows that this object is a comet: diffuse coma about 9" in diameter, and a faint, broad tail, nearly 20" long toward west-northwest. Total magnitude m1 R about 18.2 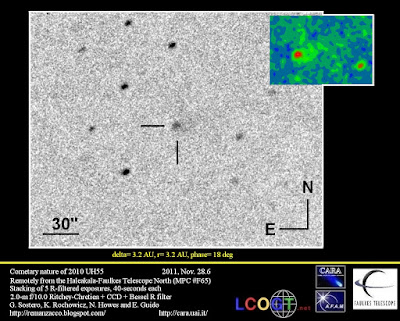 The object has been previously observed on April 2010 by Mike Nolan, Ellen Howell and colleagues with the Arecibo radar on April 19-21, 2010 and shown to be a very dark, nearly spherical object 400 meters in diameter with a relatively long rotation period, 18 to 20 hours.


We have been able to follow-up this object on November 09.25 remotely from the GRAS Observatory (near Mayhill, NM) through a 0.25-m, f/3.4 reflector + CCD. At the moment of our observing session the asteroid was moving at about 260.07 "/min and it was of magnitude ~11. The image below is a single 60-second exposure (click on it for a bigger version). 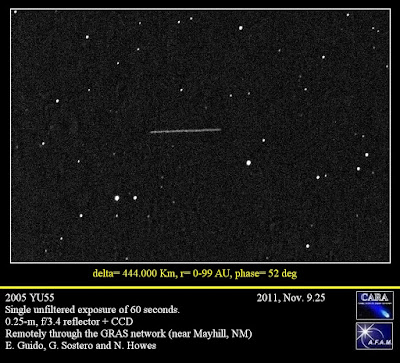 While this is an animation showing the object movement in the sky. Each image was a 2-second exposure. Click on the thumbnail to see a bigger version:

Scientists working with the 70-meter Deep Space Network antenna at Goldstone, California, have generated a short movie clip of asteroid 2005 YU55 from data  collected on November 07, 2011. These are the highest-resolution radar images ever obtained for a near-Earth object:

Due to its size and proximity to Earth, the Minor Planet Center has designated 2005 YU55 as a "Potentially Hazardous Asteroid". Although classified as a potentially hazardous object, 2005 YU55 poses no threat of an Earth collision over at least the next 100 years, the entire interval over which its motion can be computed reliably.

For more info about this close approach: