Following the posting on the Central Bureau's Transient Object Confirmation Page about a possible Nova in Scutum (TOCP Designation: PNV J18395972-1025415) I performed some follow-up of this object through a TEL 0.6-m f/6.5 astrograph + CCD located in the El Sauce Observatory in Chile and operated by Telescope Live network.

On images taken on October 31.01, 2019 I can confirm the presence of an optical counterpart with R-filtered CCD magnitude about +8.4 (saturated in a 10-second exposure) at coordinates:

N. Samus writes that the permanent GCVS designation V659 Sct has been assigned to this nova.

Below my confirmation image (sum of two unfiltered 30-sec exposure through a 0.6-m f/6.5 astrograph + CCD; El Sauce Observatory, Chile). Click on the image for a bigger version: 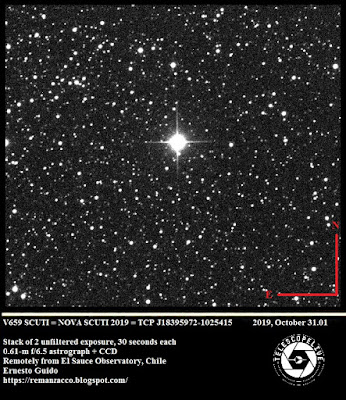 An animation showing a comparison between my image and the archive POSS1 Blue plate (1951-07-30).

Below the same animation with a larger field of view. At the bottom left of V659 Sct you will notice a star occupying a different position in the new image with respect to the 1951 archive image. This star (Gaia designation DR2 4155146598548456064) is a high proper  motion star. Most stars are so distant that their apparent motion even over hundreds of years is all but negligible to naked eye observers. Some stars have very significant movements compared to the background stars (Click on it for a bigger version:

Below an image that is the difference between the new image and the archive image useful to highlight the "new" objects. There you can easily see the new galactic nova V659 Sct and the  high proper motion star. 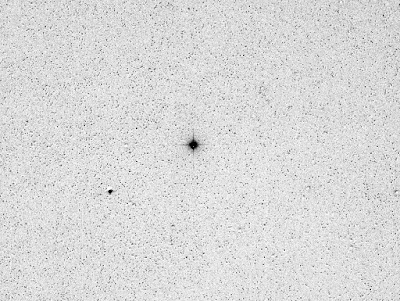