After exactly 5 years, 2012 TC4 will have a new close approach with our planet that will provide astronomers with a valuable opportunity to learn more about its orbit and composition and to test the network of observatories and scientists who work with planetary defense. This asteroid was not observed since the week it was discovered in October 2012 and it has been recovered by astronomers using one of the European Southern Observatory's 8.2-meter telescopes at the Very Large Telescope (VLT) on July 27, 2017 at an apparent magnitude of 26.8 (making it the faintest Near Earth Asteroid so far measured).

2012 TC4 has an estimated size of 12 m - 27 m (H=26.7) and it will have a close approach with Earth at about 0.13 LD (Lunar Distances = ~384,000 kilometers) or 0.00034 AU (1 AU = ~150 million kilometers) at 0542 UT on 12 Oct. 2017 and it will reach the peak magnitude ~13. (For comparison, the asteroid that hit Earth’s atmosphere near Chelyabinsk, Russia, in February 2013 was roughly 20 meters across). The rapid rotation and lightcurve amplitude (rotation period of 0.2038 hours with a brightness variation of 0.93 magnitude) suggest that the 2012 TC4 is an elongated, monolithic body (a rubble pile would have spun itself apart). Non-principal axis rotation suggests that it probably has a complex (non-ellipsoidal) shape. 2012 TC4 should be detectable at Goldstone from about Oct. 9 - 16, but not at the moment of closest approach, when it will be too far south for Goldstone to track.

Below you can see my image (single 120-second exposure) of 2012 TC4 obtained on 2017, Oct. 11.35, few hours before its close approach. At the moment of the shot, the asteroid was of magnitude ~15.9 and moving at ~24"/min. The asteroid is trailed in the image due to its fast speed. Click on the image below to see a bigger version. (North is up, East is to the left). 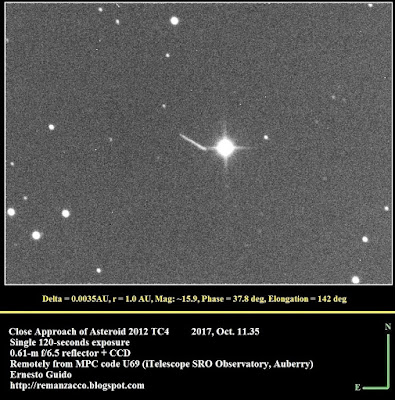 The short animation below is showing the movement of 2012 TC4 (two consecutive 120-second exposure). Click on the thumbnail below to see the animation (North is up, East is to the left).

Thanks to the new observations following its 2017 recovery, it became clear that new orbit solution precludes a possible impact in 2050: "2012 TC4 would miss the keyhole that would lead to an impact with Earth in 2050. This plot shows the b-plane—the asymptotic location of TC4 relative to the Earth before the Earth's gravity starts bending the trajectory of TC4. The b-plane intersections for progressive orbit solutions is shown by the ellipses (dashed lines show 1-σ uncertainties, solid lines show 3-σ uncertainties), while the red dots show the b-plane coordinates that lead to an impact in 2050. Starting with the Sept 28 solution, the 3-σ uncertainites fall well clear of the red dots, indicating that the asteroid will miss the Earth in 2050. Future impacts beyond that date have not been ruled out."

by Ernesto Guido
Pubblicato da Team a 3:14 PM No comments: