We performed follow-up measurements of this object, while it was still on the neocp.  Stacking of 10 unfiltered exposures, 120-sec each, obtained remotely on 2014, November 18.9 from I89 (iTelescope network - Nerpio) through a 0.43-m f/6.8 reflector + CCD, shows that this object is a comet: diffuse coma about 6" in diameter. 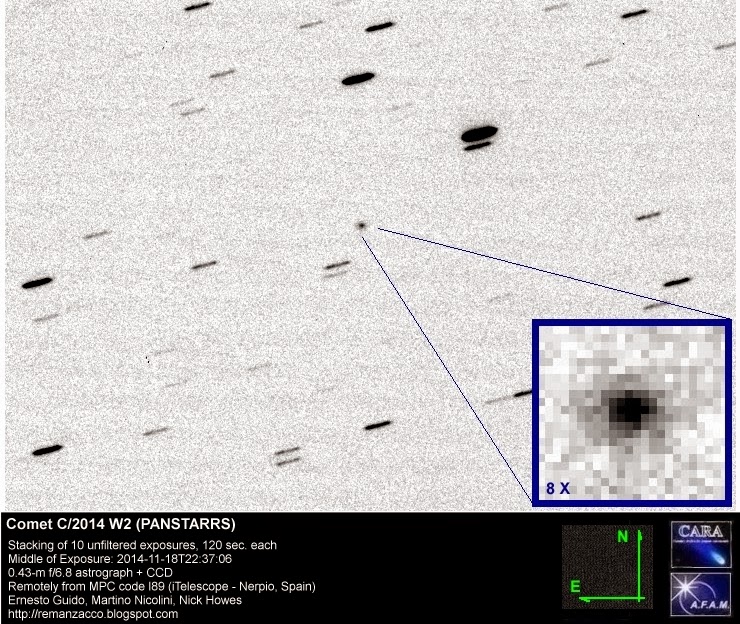 On 12 November 2014, Philae landed of comet 67P/Churyumov-Gerasimenko. Actually looks like Philae landed 3 times on the comet's surface. In fact, magnetic field data from Philae’s ROMAP instrument revealed it touched the surface on  15:33UT, 17:26 and 17:33 UTC. In the weak gravity of the comet the first bounce took about 2 hours and now the lander is thought to be about 1 km away from the original landing site.

Below you can find a selection of the most important images (click on each image for a bigger version) & info arriving from Philae and Rosetta in these exciting hours. For all our previous updates about Rosetta mission please click here.

Description for the image below by ESA: "Rosetta’s lander Philae took this parting shot of its mothership shortly after separation. The image was taken with the lander’s CIVA-P imaging system and captures  one of Rosetta's 14 metre-long solar arrays. It was stored onboard the lander until the radio link was established with Rosetta around two hours after separation, and then relayed to Earth. The lander separated from the orbiter at 09:03 GMT/10:03 CET"


Description for the image below by ESA: "The image shows comet 67P/CG acquired by the ROLIS instrument on the Philae lander during descent on Nov 12, 2014 14:38:41 UT from a distance of approximately 3 km from the surface. The landing site is imaged with a resolution of about 3m per pixel.The ROLIS instrument is a down-looking imager that acquires images during the descent and doubles as a multispectral close-up camera after the landing. The aim of the ROLIS experiment is to study the texture and microstructure of the comet's surface. ROLIS (ROsetta Lander Imaging System) is a descent and close-up camera on the Philae Lander."

The video below is showing the ESA ROSETTA control room when Philae landed. Great joy with some Italian slang :D

The image below is the FIRST EVER IMAGE FROM THE SURFACE OF A COMET!!


Description for the image below by ESA: "Rosetta’s lander Philae is safely on the surface of Comet 67P/Churyumov-Gerasimenko, as these first two CIVA images confirm. One of the lander’s three feet can be seen in the foreground. The image is a two-image mosaic."


New images and info have been shown at ESA press conference. Because of the failure of a thruster & harpoons the lander bounced about 1 km away from the previously chosen landing site (that before the bounce was hit with great precision) and it is now almost vertical with one foot probably in the open air. Due to its new location on the comet and angle position, unfortunately Philae’s solar panels are generating much less power than had been planned, and when its batteries drain in a couple of days, it may not be able to recharge. Anyway the lander is still in contact with the Rosetta orbiter, performed its initial set of scientific observations and it's sending back data & images.


From ESA blog. "With its batteries depleted and not enough sunlight available to recharge, Philae has fallen into 'idle mode' for a potentially long silence. In this mode, all instruments and most systems on board are shut down. Prior to falling silent, the lander was able to transmit all science data gathered during the First Science Sequence. From now on, no contact would be possible unless sufficient sunlight falls on the solar panels to generate enough power to wake it up. The possibility that this may happen was boosted this evening when mission controllers sent commands to rotate the lander's main body, to which the solar panels are fixed. This may have exposed more panel area to sunlight."

The image below is showing the moment when Philae's battery voltage was approaching the limit.

Description for the image below by ESA: "These incredible images show the breathtaking journey of Rosetta’s Philae lander as it approached and then rebounded from its first touchdown on Comet 67P/Churyumov–Gerasimenko on 12 November 2014. The mosaic comprises a series of images captured by Rosetta’s OSIRIS camera over a 30 minute period spanning the first touchdown. The time of each of image is marked on the corresponding insets and is in GMT. A comparison of the touchdown area shortly before and after first contact with the surface is also provided. (Touchdown occurred at 15:34 GMT spacecraft time (with the signal received on Earth at 16:03 GMT); the image marked 'touchdown point' was taken afterwards, at 15:43 GMT, but clearly shows the evidence of the touchdown event when comparing with an image taken previously.) The images were taken with Rosetta’s OSIRIS narrow-angle camera when the spacecraft was 17.5 km from the comet centre, or roughly 15.5 km from the surface. They have a resolution of 28 cm/pixel and the enlarged insets are 17 x 17 m. From left to right, the images show Philae descending towards and across the comet before touchdown. The image taken after touchdown, at 15:43 GMT, confirms that the lander was moving east, as first suggested by the data returned by the CONSERT experiment, and at a speed of about 0.5 m/s. The final location of Philae is still not known, but after touching down and bouncing again at 17:25 GMT, it reached there at 17:32 GMT. The imaging team is confident that combining the CONSERT ranging data with OSIRIS and navcam images from the orbiter and images from near the surface and on it from Philae’s ROLIS and CIVA cameras will soon reveal the lander’s whereabouts.

In the meantime Rosetta spacecraft will continue its exploration of Comet 67P/Churymov–Gerasimenko during the coming year as this comet come closer to our Sun. The image below shows Rosetta’s orbit, focusing on the manoeuvres after 12 November 2014.

In fact below you can see a new image taken by NAVCAM (Rosetta's navigation camera) on November 17, 2014 at a distance of 42 km from comet 67P and showing traces of activity stemming from the comet's neck.


by Ernesto Guido
Pubblicato da Team a 12:58 PM No comments: