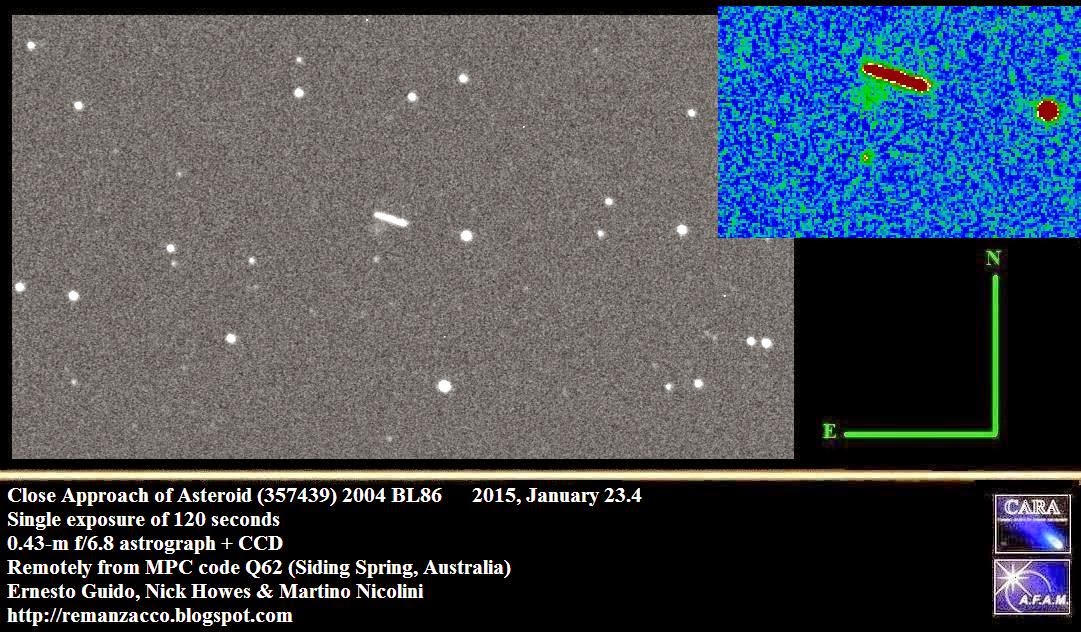 The graphic below depicts the passage of asteroid (357439) 2004 BL86 past Earth on January 26, 2015.  The view is nearly edge-on to the Earth's orbit; the Moon's nearly circular orbit is highly foreshortened from this viewpoint. The asteroid moves from the south to the north, from below the Earth's orbit to above. Times indicated on the graphic are Universal Time. Click on the image for a bigger version.

When 2004 BL86 will reach the peak magnitude +9 on the evening between January 26-27, it should be visible for several hours in small telescopes if you know where to look. The image below shows its path in the sky in those days. When brightest, it will be in the constellation Cancer. A more detailed map is available here.

Scientists working with NASA's 70-meter Deep Space Network antenna at Goldstone, California, have released the first radar images of asteroid (357439) 2004 BL86. The images show that this asteroid has its own small moon. The signature of the satellite was seen in lightcurve data reported earlier by J. Pollock (Appalachian State University, North Carolina) and  P. Pravec (Ondrejov Observatory, Czech Republic) and then confirmed by radar.

"The primary body is approximately 325 meters across and has a small moon approximately 70 meters across. In the near-Earth population, about 16 percent of asteroids that are about 200 meters or larger are a binary (the primary asteroid with a smaller asteroid moon orbiting it) or even triple systems (two moons). The resolution on the radar images is 4 meters per pixel."

Below you can see the animation made by using 20 radar images obtained at Goldstone and showing asteroid (357439) 2004 BL86 and its moon. Click on the animation to see a bigger version.

Comet C/2014 Q2 (Lovejoy) puts on a great show on January’s evening sky, with its very long, structured and rapidly changing ion tail. Below an image of comet C/2014 Q2 taken on 14 January 2015. More info on the caption. Click on it or here for a bigger version

Below a finder chart to help you locate this comet during January 2015. The dates are in Universal Time; the ticks are at 0:00 UT. Click on it for a bigger version.