During the month of July 2016,  1 new comet has been discovered and there were 4 comet recoveries. An international team of astronomers discovered a new dwarf planet (designated 2015 RR245) orbiting  in the disk of small icy worlds beyond Neptune. The Team Radar at Arecibo observed the Near-Earth asteroid (154244) 2002 KL6. "Current comet magnitudes" & "Daily updated asteroid flybys" pages are available at the top of this blog  (or just click on the underline text here).

The dates below refer to the date of issuance of CBET (Central Bureau Electronic Telegram)  which
reported the official news & designations. 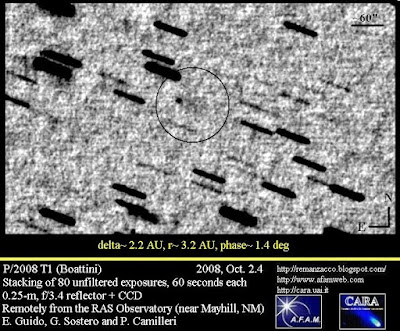 July 11 An international team of astronomers discovered a new dwarf planet orbiting in the disk of small icy worlds beyond Neptune. Designated 2015 RR245 by the International Astronomical Union's Minor Planet Center, it was found using the Canada-France-Hawaii Telescope on Maunakea, Hawaii,  as part of the ongoing Outer Solar System Origins Survey (OSSOS).  The Minor Planet Center describes the object as the 18th largest in the Kuiper Belt. Click on the image below to see a bigger version of the rendering of the orbit of RR245 (orange line). Objects as bright or brighter than RR245 are labeled. The blue circles show the projected orbits of the major planets.


July 16 The Team Radar at Arecibo observed the Near-Earth asteroid (154244) 2002 KL6. This asteroid was discovered by Near-Earth Asteroid Tracking (NEAT) program in May 2002. It approached Earth to within 0.07 au (27 lunar distances) on July 22, 2016. Its absolute magnitude is around 17.4, which suggests a diameter within a factor of two of 1 km, assuming an optical albedo of 18%. Its rotation period is around 4.6 h based on lightcurves.

July 27 Rosetta is set to complete its mission in a controlled descent to the surface of its comet on 30 September. The mission is coming to an end as a result of the spacecraft’s ever-increasing distance from the Sun and Earth. "It is heading out towards the orbit of Jupiter, resulting in significantly reduced solar power to operate the craft and its instruments, and a reduction in bandwidth available to downlink scientific data.  Instead of risking a longer hibernation that is unlikely to be survivable, and after consultation with Rosetta’s science team in 2014, it was decided that Rosetta would follow its lander Philae down onto the comet. The final hours of descent will enable Rosetta to make many once-in-a-lifetime measurements, including very-high-resolution imaging, boosting Rosetta’s science return with precious close-up data achievable only through such a unique conclusion." In the meantime Rosetta is still observing the comet. Below you can see comet 67P imaged by the OSIRIS instrument on 27 July 2016 from a distance of 8km. Click onthe image for a bigger version.


by Ernesto Guido
Pubblicato da Team a 8:38 PM No comments: