Following the posting on the Central Bureau's unconfirmed-objects webpage about a possible nova in Ophiucus, today we performed some follow-up of this object remotely through a 0.25-m, f/3.4 reflector + CCD, near Mayhill (NM).


We can confirm the presence of a relatively bright counterpart at coordinates: 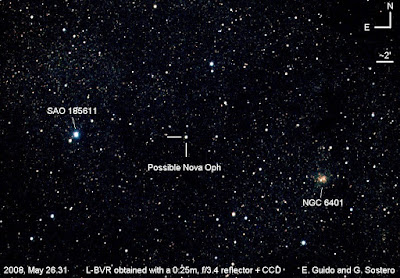 Comparison with a UK Schmidt Telescope red plate, obtained on 1991, August 11 show nothing in this position (limiting magnitude near 20).

Prompted by a comment published on the newsgroup [Comets-ml] about a possible outburst of comet 7P/Pons-Winnecke detected by G. Muler, on 2008, May 23, we performed some follow-up of this object. Stacking of 30 unfiltered exposures, 60 seconds each, obtained remotely from Mayhill (NM) on 2008, May 25.2 through a 0.25-m, f/3.4 reflector + CCD, show that 7P/Pons-Winnecke currently has a diffuse coma nearly 25 arcsec in diameter, with a sharp central condensation.

Total magnitude m1 was measured to be R= 15.9. Preliminary afrho calculation provides a rather flat trend, with an average value of 30 +/- 5 cm. 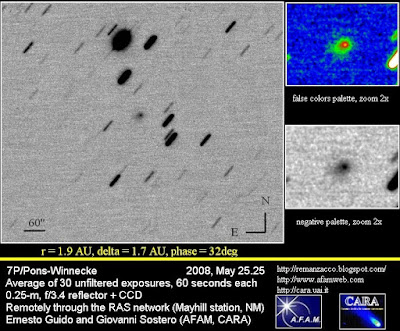 Prompted by a comment published on the newsgroup [Comets-ml] about a possible outburst of comet 46P/Wirtanen reported by M. Kidger and his spanish collaborators, we performed some follow-up of this object.


Stacking of 10 unfiltered expsoures, 50 seconds each, obtained remotely from Mayhill (NM) on 2008, May 18.2 through a 0.25-m, f/3.4 reflector + CCD, show that 46P/Wirtanen currently has a very compact coma nearly 15 arcsec in diameter. The total magnitude m1 was measured to be R= 14.8. Preliminary afrho calculation provides a rather flat photometric profile with a value ranging from 90 to 130-cm for apertures diameters passing from, respectively, 10,000 to 30,000-Km at the comet distance. 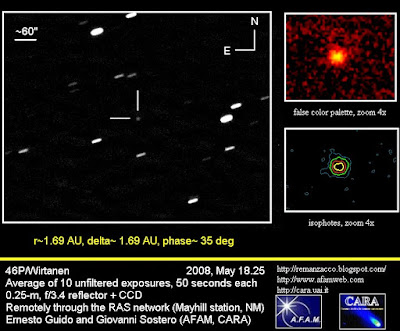 It was found in the morning sky within Pegasus, with the 0.68-m schmidt of the "Catalina Sky Survey" on 2008, May 14.46, and it has been described by the discoverer as having a diffuse coma with a clear central condensation and a fan-shaped tail 1 arcmin long in p.a. 210 degrees.

We observed it remotely from Mayhill (NM) on 2008 May 15.4, through the 0.25-m, f/3.4 reflector + CCD of the "Global Rent A Scope" network: we found a sharp central condensation about 8" in diameter, surrounded by a faint, extended coma about 25" in diameter (total mag about 15.5, nuclear magnitude about 16.6) and a fan-shaped tail 30" long toward the southwest. 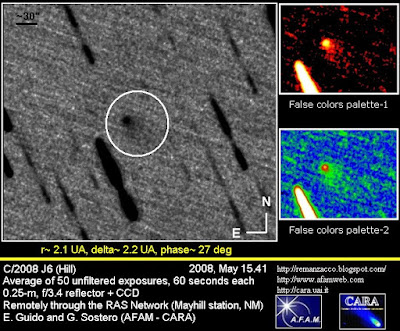 Preliminary orbital elements from the Minor Planet Center assume that this object moves along a parabolic orbit (i= 46 deg, q= 2.1 AU); perihelion has been reached at the end of April 2008. According the current ephemerids, in the next future this comet will decrease its brightness.

by Ernesto Guido & Giovanni Sostero
Pubblicato da Team a 10:59 AM No comments:


After few days, the asteroid has been catalogued as a "virtual impactor", because it has a very little probability that its orbit could be a threat for our planet; however currently it is flagged with a level "0" in the Torino scale. This situation could change, so these kind of minor planets are kept under strict monitoring by two istitutions , that are collecting the updated astrometric measurements about 2008 HJ : the Neo Object Program and Neo Dys Risk Page.


As suggested by the Minor Planet Center, it is mandatory to perform futher follow-up of this asteroid in next months, in order to improve the knowledge of its orbit with new measures. This is important to reduce the uncertains on orbital parameters and to confirm that 2008 HJ really belongs to the 0 class of Torino scale, that rappresents a very low level of hazard.


The image below of 2008 HJ has been obtained by Remanzacco Observatory team in the same day of its discovery. 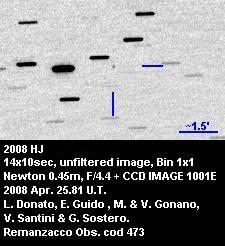 At the time of discovery, 2008 HJ had the smallest known rotation period in the Solar System, completing one revolution every 42.7 seconds (see lightcurve below).

by Ernesto Guido
Pubblicato da Team a 8:59 PM No comments:

It was discovered with the 1.5-m reflector of the "Mount Lemmon Sky Survey" on 2008, May 6.44, and it has been described by the discoverer as having a bright condensed coma, diameter of 20 arcsec. Preliminary orbital elements from the Minor Planet Center show that this object moves along a parabolic orbit (i= 16.6 deg, q= 1.1 AU); perihelion is expected to occour on 2008 October 7th. According the current ephemerids, the new comet "Beshore" will reach approximately magnitude 8.5 at perihelion.

Soon after its posting in the M.P.C. NEO_Confirmation Page (around noon, April 6th) with the ID code "8JBD660", we wanted to get a close look at this relatively bright object, picked up just hours earlier. Unfortunately the weather conditions in our traditional observing site (Remanzacco Observatory, MPC code 473) were poor. So we decided to gave it a try from a new observatory (now under completion) that is operated by our astro club: 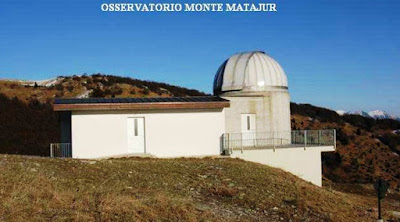 This new observing site is located about 20 Km East of Remanzacco, in the slopes of a nice mountain, named Mount Matajur. Since the Mount Matajur Observatory is 1340-m high, we hoped to skip at least some part of the haze that was affecting the plains where the Remanzacco observatory is located.


It was a wise decision, since while there, the sky suddently cleared up, so we were finally able to inaugurate our NEO/comets follow-up observing program from the recently "appointed" astrometric site MPC #B68!

When we located this relatively slow moving interloper in Ophiucus through a 0.2-m f/3 reflector + CCD, we initially considered it a star-like object (or at least, this was our very first impression looking at the single raw images that appeared on the PC monitor). However, when we carefully inspected the final stacking of 20 unfiltered exposures (60 seconds each) obtained on 2008, May 6.95, we immediately realized that this was not the case, since we noticed an extremely compact coma of almost uniform brightness about 20 arcsec in diameter, slightly elongated toward south-west: 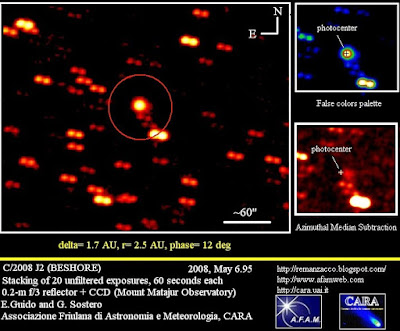 The total magnitude m1 was measured to be R~14.


Afterwards, we decided to continue the study of this comet candidate (still listed in the NEO-Confirmation Page as object "8JBD660") with the instruments of the "Rent A Scope" network. So, on 2008, May 7.3 we connected with a 0.25-m f/3.4 reflector + CCD located near Mayhill (NM), where we initially collected 10 unfiltered exposures, 60-seconds each, that we stacked. Analyzing the result, we were able to confirme the existence of a coma nearly 25 arcsec in diameter elongated toward PA 240 deg, with a very flat photometric profile: 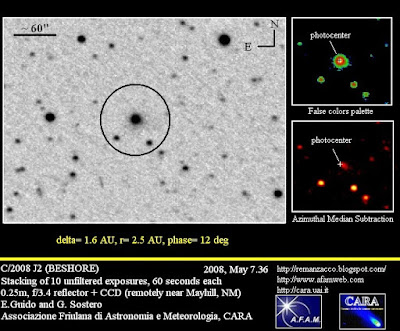 Filtered photometry performed soon afterwards (on 2008, May 7.37) through the same scope and a Cousins Red filter provided a total m1 magnitude of R~ 13.9, while a preliminary afrho calculation (proxy of the dust abundance within the coma) gave a value of nearly 450 +/- 80 cm; considering its current distance from the Sun, this seems to point toward an active comet. 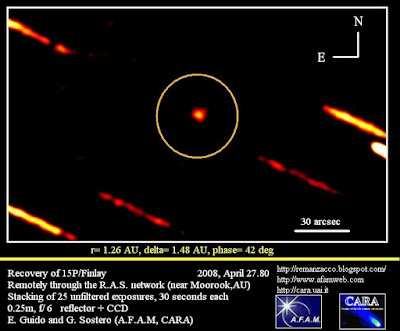 
It's interesting to notice that, due to the proximity to Earth of its orbit (15P/Finlay is a Jupiter-family comet in a low inclination orbit just outside Earth's orbit), comet Finlay has been studied by several authors as a potential candidate for meteoroid delivering. D.A.J. Seargent discussed a potential relation of the famous Murchison meteorite fall with 15P/Finlay.


"Lubor Kresak identified comet 15P/Finlay as a likely source of meteor storms in the period 2004-2064. Neslusan and coworkers searched for photographed orbits in the IAU database, expecting activity around september 24, but no orbit could be linked to this comet. Martin Beech found that in the years 2001 and 2008 some meteoroids can make it toward the Earth's orbit, but Earth is not a the right time at that spot to cause a meteor outburst." (P.Jenniskens, 2006, chap. 19)


In a paper published in 1993, Z. Sekanina investigated about the orbital anomaly of 15P/Finlay (and few other periodic comets) as a result of the temporary activation of new discrete sources in cometary nuclei.

It was picked-up with the 0.68-m schmidt of the "Catalina Sky Survey" on 2008, May 2.46, and it has been described by the discoverer as having a coma diameter of nearly 50 arcsec, and a fan-shaped tail 2 arcmin long toward PA 235 deg. After posting on the Minor Planet Center's 'NEOCP' webpage, a number of observers performed follow-up of this object. The undersigneds observed it through the 0.45-m, f/4.4 reflector + CCD of the Remanzacco Observatory (Italy) on 2008, May 3.0: we noticed a small compact coma, almost 15 arcsec in diameter, having a total magnitude of 14.7 (m2 nearly 15.5); an apparent tail spans almost 35 arcsec toward PA 280 deg. (see image below; click on it for a bigger version). 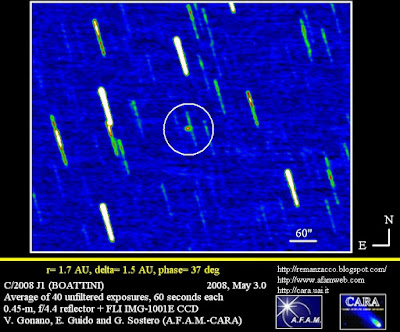 Preliminary orbital elements from the Minor Planet Center show that this object moves along a parabolic orbit (i= 46 deg, q= 1.5 AU); perihelion has been reached in the middle of March 2008. According the current ephemerids, the new comet "Boattini" will decrease its brightness as it will recede from both, Sun and Earth. 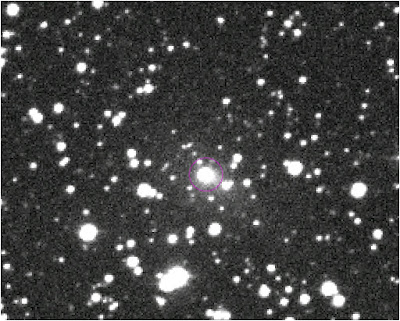