IAU circular No. 9078, issued on 2009, Sept. 29, announces that an asteroidal object, discovered with a 0.45-m f/2.8 reflector + CCD by the "La Sagra Sky Survey" (Spain), has been reported to show cometary features by several observers, involved in its astrometric follow-up.

Our attention to this object with a peculiar orbit, has been drawn by one member of the "La Sagra" staff (R. Stoss, 2009 Sept. 10, private communication). Then we planned an observing campaign, asking some help to other fellow observers of the CARA collaboration (namely, P. Bacci, E. Bryssinck and R. Ligustri).

Our first attempt to investigate about the nature of this object, simply failed: the images obtained on 2009, Sept. 14, remotely from the Mayhill Station (NM) of the GRAS network, were of bad quality due to the presence of thin cyrrus clouds. Then, for several nights, bad weather conditions prevented us to perform further follow-up on it.

Finally, on Sept. 18.5, we succeed imaging it remotely with the 0.35-m f/7 reflector + CCD of the "Skylive" network (near Trunkey, Australia). At that time, the object was nearly 70 deg above the horizon, and the very good seeing allowed us to identify its tiny round coma, about 7-arcsec in diameter, having a total (unfiltered R) magnitude of about 19: 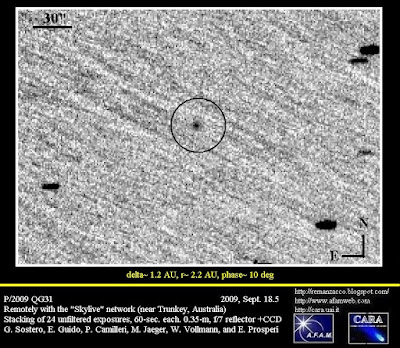 Further confirming observations were performed by other fellow observers we alerted, like the CARA memebers E. Bryssinck (remotely through the Tzec Maun 0.4-m reflector, NM, Sept. 16.3) and R. Ligustri (Talmassons, Italy, 0.35-m reflector; Sept. 19.9), who reported a coma ranging from 10 to 15-arcsec in diameter.

According to the Minor Planet Center's database, this low-activity, Jupiter-family comet, completes a revolution around the Sun every 6.8 years, with a perihelion at about 2.1 Au from our star (that will be reached in Oct. 2009), and an aphelion at 5.0 AU; inclination above the ecliptic plane is about 5 deg. It's future visibility will be complicated by its declining brightness.

Congratulations to the "La Sagra Sky Survey" team for their discovery. 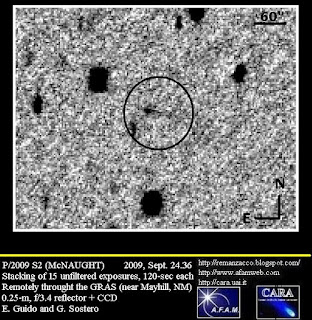 Preliminaty orbital elements and ephemerids of this periodic comet have been published on M.P.E.C. 2009-S90. Perihelion has been reached on June, 2009, at about 2.2 AU from the Sun. The orbit has an inclination of 28 degrees and is completed in nearly 8.5 years. P/2009 S2 will mostly remain a faint southern comet for the rest of the current perihelium passage.

This minor planet, belonging to the "Apollo" class, is also flagged as a "Potentially Hazardous Asteroid", an object that, because of its orbital parameters, might represent a possible threat of impact for planet Earth.

It has beeen discovered serendipitously by the Spanish amateur astronomer J. M. Bosch (Santa Maria de Montmagastrell, MPC#B74) on 2009, Sept. 16.2, ay magnitude about 17. At that time it was posted on the NEO-CP webpage of the Minor Planet Center as "jmbo11"; after a couple of days it was withdrawn, because it was not confirmed by any further observations.

On 2009, Sept. 22, the LINEAR sky survey picked-up a fast moving object, that was posted in the NEO-CP as "BQ24981". After some follow-up observations from various sites, on 2009 Sept. 23 the MPC published M.P.E.C. 2009-S72 informing that the two objects mentioned before were actually the same celestial body.

We performed some follow-up of this object on 2009, Sept.23.1, remotely from the Mayhill Station (NM) of the GRAS network. Click on the image below for a bigger version. 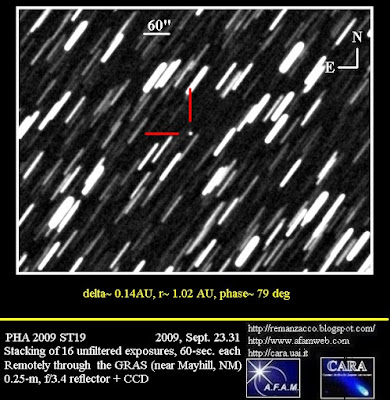 Congratulations to J. M. Bosch for his find.

IAU Circular nr. 9074 issued on 2009, Sep. 22, announces the discovery of a new comet by A. R. Gibbs, named P/2009 S1 (Gibbs). It was found on Sep. 20 in the course of the Catalina Sky Survey with the Catalina 0.68-m Schmidt telescope. After posting on the Minor Planet Center's 'NEOCP' webpage, other observers have noted the cometary appearance of this 18.5 - 19 magnitude object. 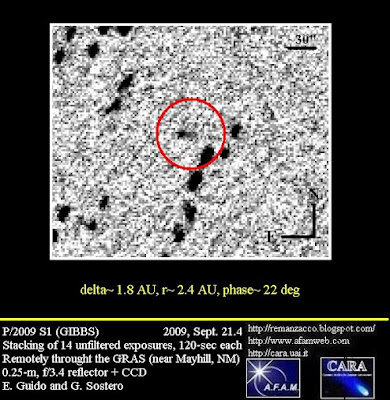 This is the 13th comet discovery for Gibbs.

Follow-up after its posting in the NEO-CP webpage was secured by several observers (P. Birtwhistle, G. Hug and the undersigneds), who noticed the presence of cometary features (in general, the existence of a small coma, about 10 arcsec in diameter with little or no central condensation, was reported).

Thus this object has been named as P/2009 R2 (PIGOTT-LINEAR-KOWALSKI).

At first we imaged this object remotely, on Sept. 11.4, through the RAS network (MPC# H06, Mayhill, NM) with a 0.25-m, f/3.4 reflector + CCD: co-adding of 10 unfiltered exposures, 120-seconds each showed that this object was diffuse, without a clear central condensation (this created us some troubles establishing a useful photocenter for astrometrical purposes). Glare from a nearby field star prevented us to firmly establish a precise coma diameter, however in our images we saw at least 10 arcsec of coma.

Then we performed some additional follow-up on on 2009, Sept. 13.1, from the Malina River Observatory (MPC# B90, Povoletto, Italy) with a 0.25-m, f/11 reflector + CCD: stacking of 15 x 120-sec unfiltered exposures, confirmed the presence of a tiny coma, about 12-arcsec in diameter, with an extremely weak central condensation (40% illuminated Moon about 26-deg away).

Our image is available below: 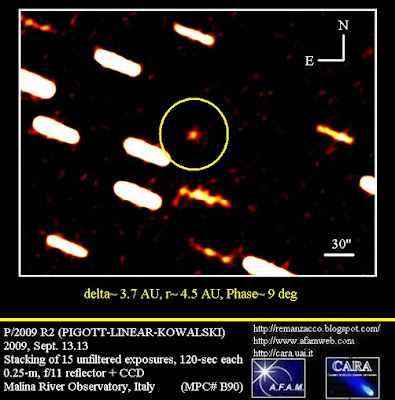 IAU Circular nr.9071, issued on 2009, Sep. 10, announces the discovery of a new comet by R. H. McNaught, named C/2009 R1 (McNAUGHT). It was found on Sep. 09 in the course of the Siding Spring Survey with the 0.5-m Uppsala Schmidt telescope. Pre-discovery Uppsala Schmidt images taken by G. J. Garradd and McNaught on July 20, Aug. 1, and 18 have been identified by T. Spahr and B. G. Marsden in astrometry submitted to the Minor Planet Center.

After posting on the Minor Planet Center's 'NEOCP' webpage, other observers have noted the cometary appearance of this 17.5 magnitude object. 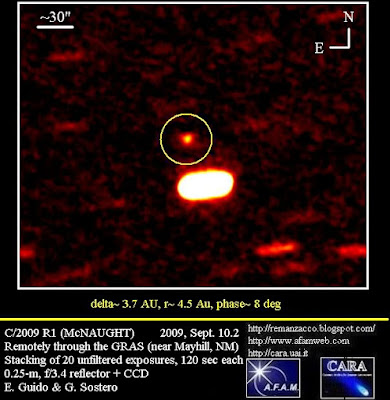 This comet may reach magnitude 5 at the end of June 2010, but the elongation will be very small (only 18 degree on June 27, 2010) and so the observing conditions.

This is the comet discovery number 51 for Robert McNaught.

Update about the unusual activity of 217P/LINEAR

We post here an update about the unusual activity of 217P/LINEAR (see our previous post http://bit.ly/32cXXc ). We did not use invasive image processing routines (as the Larson-Sekanina filtering) in order to minimize the risk of introducing any artefact in the images. In the panels you will find only ordinary grayscale palette images, azimuthal median subtractions and 1/r theoretical coma subtractions, in order to enhance inner coma details:

Central condensation evolution during the rise of the phenomena:
http://tinyurl.com/nqgwdd

From what is possible to see from the above images, we might bracket the rise of the event between Aug. 20 and Aug. 21. It had a rather quick evolution (matter of hours) and then it settled down in some days.

We would exclude a foreshortening effect. In our opinion we have witnessed a transient phenomena that has interested the nucleus of the comets and/or its surroundings for a relatively short time. Currently (i.e. after a couple of weeks from the event) the comet seems to have recevered to its pre-something occurence.

We are grateful with the authors of the images.

After posting on the Minor Planet Center's 'NEOCP' webpage, other observers have noted the cometary appearance of this 17magnitude object. 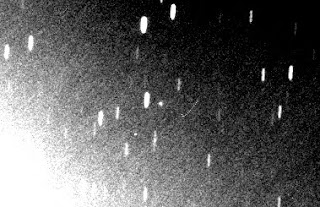 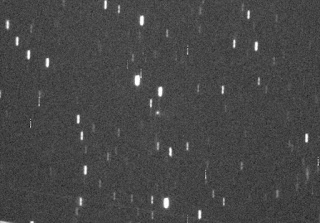 This is the 50th comet discovery for Robert McNaught.

Congratulations to Rob for this great achievement.

This is comet discovery number 10 for Andrea Boattini.