On December 08, 2017 B. Skiff reported on mpml mailing list, that the centaur 174P/Echeclus  (also known as 60558 Echeclus) "seems to be at least 4 mag brighter than expected, and indeed as it appeared at the start of last night's images.  The Dec 7 series shows the outburst in progress on images taken near 2:00 and 2:48 UT; it is much brighter now (Dec 8 about 3:30 UT)". Last observations before this outburst had this object at around magnitude 18.

Prompted by this alert, I perfomed some follow-up of 174P/Echeclus and I can confirm that this object is experiencing a bright phase. Unfiltered exposures, 30-seconds each, obtained  remotely from Q62 (iTelescope network) on 2017, December 08.57 (through a 0.50-m f/6.8 astrograph + CCD + f/4.5 focal reducer) reveal 174P as a bright featureless star-like object of magnitude ~14.1 N (click on the image below for a bigger version). 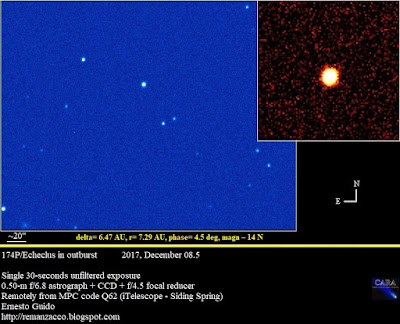 This very interesting object was discovered by Spacewatch in 2000 and initially classified as a minor planet with provisional designation 2000 EC98 (its final minor planet designation is 60558 Echeclus). The presence of coma around it was first detected by Choi and Weissman (2006) on 2005 December 30.50 UT with the Palomar 5m telescope. Soon after, the object was given the periodic comet designation 174P/Echeclus. During the years, it experienced many outbursts. You can find info and images on all these past bright phases on this blog.

by Ernesto Guido
Pubblicato da Team a 5:19 PM No comments: