During the month of February 2017, 4 new comets were discovered. "Current comet magnitudes" & "Daily updated asteroid flybys" pages are available at the top of this blog (or just click on the underline text here). See below for the "Other news" section.

Feb 02 At this link, animation by L. Elenin showing the egress of near-earth asteroid 2017 BS32 from Earth's shadow.

Feb 09 New impact crater spotted on Mars: "This new crater, which formed explosively at the point of impact, has a diameter of roughly 8 meters (about 25 feet), but its surrounding blast zone and ejecta extend over a kilometer (about one mile) beyond the crater itself. This new impact was discovered using the lower-resolution Context Camera (CTX), also on board Mars Reconnaissance Orbiter. An older CTX image of this region from May 2012 shows a uniformly dust-covered surface, while a newer CTX image from September 2016 reveals the crater’s dark blast zone.". Click on the image below for a bigger version.

Feb 11 Unknown fragment from Comet 73P discovered in outburst by T. Noel. Click on the image below for a bigger version. 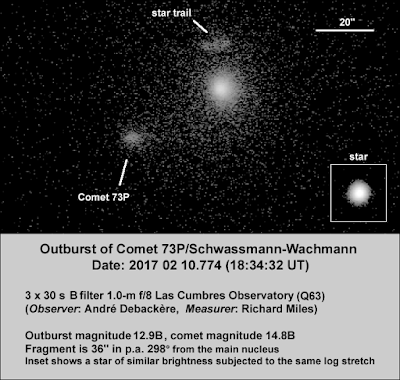 Feb 13 Radar images of asteroid 2017 BQ6 were obtained on Feb. 6 and 7 with NASA’s 70-meter antenna at GSSR. "They reveal an irregular, angular-appearing asteroid about 660 feet (200 meters) in size that rotates about once every three hours. The images have resolutions as fine as 12 feet (3.75 meters) per pixel.Asteroid 2017 BQ6 safely passed Earth on Feb. 6 at 10:36 p.m. PST (1:36 a.m. EST, Feb. 7) at about 6.6 times the distance between Earth and the moon (about 1.6 million miles, or 2.5 million kilometers). It was discovered on Jan. 26 by the NASA-funded Lincoln Near Earth Asteroid Research (LINEAR) Project, operated by MIT Lincoln Laboratory on the Air Force Space Command’s Space Surveillance Telescope at White Sands Missile Range, New Mexico." Click on the image below for a bigger version.

Feb 15 Arecibo Radar Observatory captures revealing images of Comet 45P/Honda-Mrkos-Pajdusakova :  "The comet’s shape is probably two lobes and is seen here to be about 1.3 km in size. Gif below composed of thirteen delay-Doppler images of Comet 45P/HMP after 2 hours of observation. The new radar observations have revealed Comet 45P/HMP to be somewhat larger than previously estimated. The radar images suggest a size of about 1.3 km (0.8 mi) and that it rotates about once every 7.6 hours."

by Ernesto Guido
Pubblicato da Team a 2:32 PM No comments: