After a 9½ years journey, NASA’s New Horizons spacecraft will visit tomorrow 14 July 2015 the dwarf planet Pluto. This will be the first ever flyby of Pluto and its largest moon Charon.

The spacecraft will not go into orbit around Pluto because, as explained on New Horizons website, "to get to Pluto (which is 5 billion kilometers from Earth) in just 9.5 years the spacecraft travelled very, very quickly. As a result, New Horizons will speed by Pluto at a velocity of about 43,000 kilometers per hour(27,000 miles per hour). To get into orbit, operators would have to reduce that speed by over 90%, which would require more than 1,000 times the fuel that New Horizons can carry. The second reason is scientific: If we did stop to go into orbit, we wouldn't be able to go on to explore the Kuiper Belt!"

Click on the images below to see a graphical guide to the historic mission made by Nature magazine. 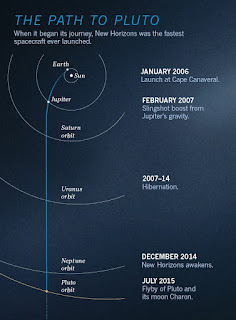 Below you can find a selection of the best images of Pluto & Charon taken by New Horizons during the weeks preceding the 14 July fly-by (click on each image for a bigger version).

Below the fly-by animation (made by Björn Jónsson using New Horizons' data) showing the fly-by trajectory from 09:36UT to 13:36UT. Closest approach 11:50UT (Charon not included in the animation).

This blog will be updated as soon as new images and news will arrive so stay tuned!

Less than 2 hours left to the Pluto flyby by New Horizons spacecraft. Google is celebrating today historic Pluto flyby with its own Google Doodle. (click on the image below for a bigger version). 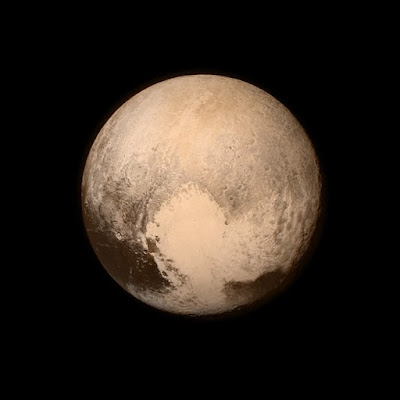 Below you can see the amazing first close-up photographs of Pluto and its largest moon Charon + an image of smaller moon Hydra sent back to the Earth by NASA’s New Horizons spacecraft a day after its successful flyby (click on each image for a bigger version).


By Ernesto Guido
Pubblicato da Team a 2:56 PM No comments: