During the 2-month period May through June 2019, 11 new comets were discovered and there were 2 comet recoveries. "Current comet magnitudes" & "Daily updated asteroid flybys" pages are available at the top of this blog (or just click on the underline text here). See below for the "Other news" section.


* Apparently asteroidal object that was discovered on CCD images obtained on 2019 May 12.5 with a 0.5-m reflector at Haleakala in the course of the "Asteroid Terrestrial-Impact Last Alert System" (ATLAS) search program), and given the minor-planet designation 2019 JU_6 by the Minor Planet Center (cf. MPS 996641; orbit on MPEC 2019-J141 from a two-day arc), has been found to show cometary appearance by CCD astrometrists elsewhere. 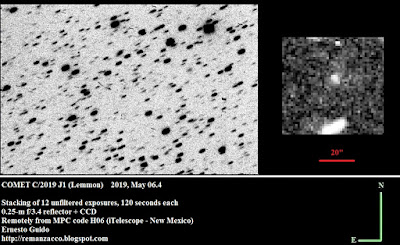 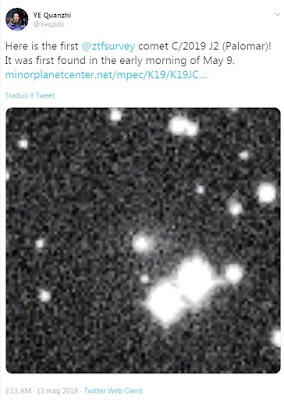 May 01 Miklós Lovas, most successful Hungarian discoverer, has passed away at the age of 88 years on April 18th. He discovered 42 supernovae, 5 comets (including 93P & 184P) and 2 unusual minor planets at the Konkoly Obs. between 1964 and 1995 via K. Sárneczky 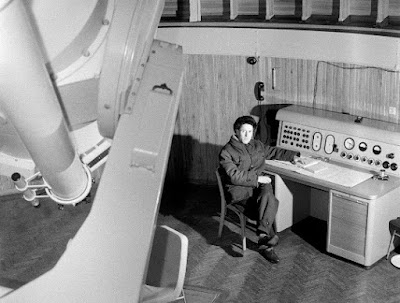 Jun 06 HiPOD: A new impact crater on Mars, formed between Sept 2016 and Feb 2019. What makes this stand out is the darker material exposed beneath the reddish dust.

Jun 19 ‘Comet Interceptor’ has been selected as ESA’s new fast-class mission in its Cosmic Vision Programme. Comprising three spacecraft, it will be the first to visit a truly pristine comet or other interstellar object that is only just starting its journey into the inner Solar System. 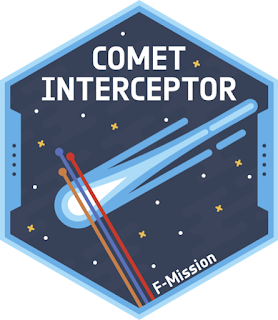 Jun 28 (CBET 4638) 2019 MO - An 18th-magnitude fast-moving asteroidal object, detected on June 22.3 and 22.4 UT with the Pan-STARRS2 1.8-m Ritchey-Chretien reflector at Haleakala and the ATLAS 0.5-m reflector at Mauna Loa and designated 2019 MO by the Minor Planet Center on MPEC 2019-M72 (which contains astrometry and orbital elements), impacted the earth's atmosphere around June 22.896 UT.  It was evidently detected in daylight satellite imagery over the Caribbean Sea. The absolute magnitude of 29.3 suggests a size prior to entry on the order of 3-4 meters. This is fourth known object to hit the earth's atmosphere after detection in space prior to impact (cf. CBET 4519).

by Ernesto Guido
Pubblicato da Team a 1:12 PM No comments: