Comet C/2008 C1 (Chen-Gao) is currently crossing the rich Milky Way fields within Cassiopeia, not far from the 2.nd magnitude star Gamma Cas. This create some troubles performing its photometry & astrometry follow-up, due to the annoying stellar crowding that usually "pollutes" the cometary coma.

On 2008, Feb. 16.7, we obtained the "cometary first light" on a new scope, a MEADE LX200R 14" OTA, mounted on a 10Micron GM2000 QCI robotic mount (this will be the heart of our remote-controlled set-up, located in the new astronomical observatory atop Mount Matajur, currently under completion): 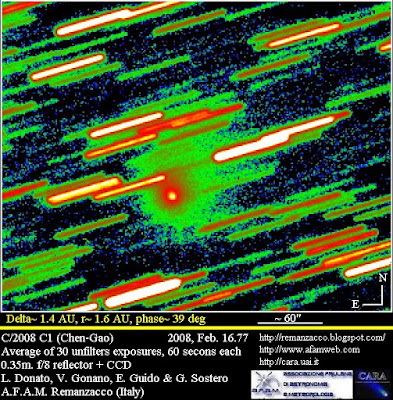 Selecting a frame series relatively free from background stars, we did some follow-up about this comet. We found that the coma extends nearly 1 arcmin, with a relatively sharp central condensation (m2 almost 15.5). Total (unfiltered) magnitude is equal to 12.5. The Afrho parameter (proxy of the dust abundance within the coma) is ~150 +/- 25 cm, with a typical pattern:

(for more info's about the Afrho parameter importance, and and the role of amateur astronomers in its determination, please visit the CARA's webpage)

There are signs of a tiny tail extending toward North-East:

This detail moves according the proper motion of the comet:

so it's unlikely to be an artefact.

Is It an Asteroid, a Comet or Both?

There has been a time when asteroids and comets were regarded as quite different objects:

"At most meetings of professional astronomers during the 20th century, asteroids were discussed by one group and comets by a generally different group...it has taken decades to realize that these objects might share similar materials, or to allow the possibility of a smooth transaction from one group to the other, based on ice content" (W.K.Hartmann, 1999, chap.23)

The picture we have today is that of "planetesimals" whose composition difference reflects the temperature of the Solar System area where they formed. Comets, accreted beyond the Snow-Line, are ice-dominated object while asteroids are expected to be relatively ice-deficient.

So, traditionally, an object is defined as a comet when it shows a resolved coma at some point in its orbit:


"Deciding whether an object is an asteroid or a comet thus depends critically on the instrumental resolution and sensitivity to low surface brightness coma" (D.C. Jewitt, 2004)

Moreover as we know, comets pass through inactive phases giving rise to the situation where it's not possible to decide the nature of the object by the means of observations. Another clue of cometary nature of an object can arrive from its dynamical path. The Tisserand “invariant” calculated in respect to Jupiter (Tj) is often used as dynamical discriminator to distinguish the nature of Solar System objects. Comets-like objects have Tj < 3.


For all these reasons is not always easy to decide what classification to assign to some objects.

We shoot 2005_WY3 few hours ago remotely from New Mexico (details on image; click on it for a bigger version): 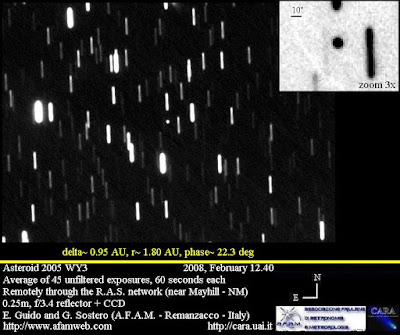 In our stacking this peculiar object has attained a good S/N (nearly 20) and shows no hints of cometary activity: its FWHM is identical to that of nearby field stars, with no traces of coma and/or tail. Either its cometary activity is currently well below the sensibility of our instrument, or there isn't any at all.

We performed some follow-up of C/2008 C1 (CHEN-GAO) on 2008 Feb 3.10 through one of the R.A.S. telescope (details on image). In our stacking is visible a nice coma, nearly 1.5 arcmin wide. Image processing shows a clear elongation of the coma, and hint of a tail, toward North-East (click on the image below for a bigger version): 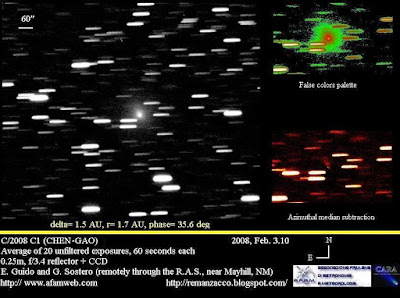 Preliminary photometric data reductions returns a total (unfiltered) magnitude close to 13. The central condensation is nearly magn.16. The afrho parameter (proxy of dust abundance within the coma) is almost 80 cm +/- 20cm, with an asymmetric profile (higher values for wider apertures). Considering the current distance from the Sun (r nearly 1.6 AU, inbound) this amount seems to point toward a comet of moderate activity.

Congratulation to our Chinese fellows for this nice find!