This periodic comet, 59P/Kearns–Kwee, has been recovered by us, on 2008, July 28 & 29, during the Visnjan School of Astronomy, an educational project aimed at the introduction of young talented students into the field of astronomy, organized every year by the Visnjan Observatory .

Two consecutive nights of follow up, as recommended by the Minor Planet Center, has been secured by means of the remotely controlled Skylive-4 telescope (0-30m, f/6.3 reflector + CCD) located in Catania, Italy (B40 – Skylive Observatory, Catania). 59P has been picked-up in the morning sky in Aries, significantly fainter than predicted (about magnitude 19) but very close to the expected position. In our stackings it appears as a faint dot of light, slightly wider than the nearby field stars of similar brightness. At recovery the comet was located about 2.8 AU from both, Earth and Sun. According to the Minor Planet Center, the last time of its observation was 2000, March 9 (Kuma Kogen Observatory).

Our recovery image. Click on it for a bigger version: 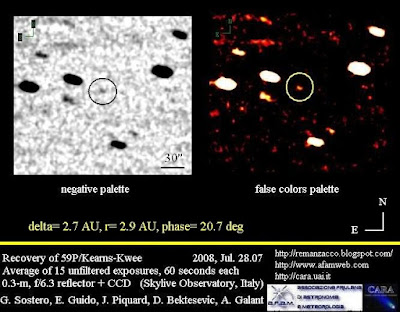 Comet Kearns-Kwee belongs to the Jupiter family comets; its period is nearly 9.5 years; at perihelion (March 2009) it will get as close as 2.3 AU from our star (beyond the orbit of Mars) while at aphelion it reaches 6.6 AU from the Sun (beyond Jupiter).

According to the current ephemerids, comet Kearns-Kwee will reach its maximum brightness at perigee, on November 2008: at that time it will shine at about magnitude 14, very well located (for northern observers) in the autumn constellation of Triangulum.

Updated orbital elements and ephemerids are available, as always, at the Minor Planet Center website.

Analyzing the images of comet C/2007 W1 (Boattini) obtained during the past nights, we found evidence of a dust tail in comet Boattini (click on the image below for a biger version): 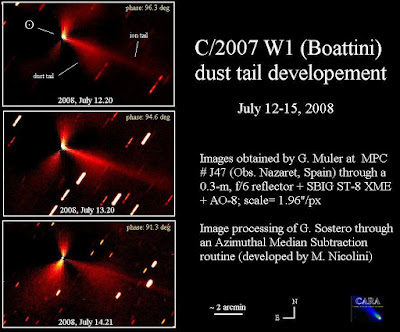 This detail appeas as a broad fan-like structure, nearly 3 arcmin long, extending toward South-West; it almost overlap the long and narrow ion tail that has been observed since before perihelion. The dust tail becames readily visible after a simple Azimuthal Median Subtraction routine, that enhances any deviation from a "normalized" profile of the coma. Probably it was present also in our previous shots of the comet, however its visibility was strongly hampered because of the poor observing conditions (comet very low in the sky in the morning twilight).

Currently the solar elongation of C/2007 W1 is increasing, so we expect that this detail will be soon picked-up by a number of other observers, without any particular image-processing routine. Observers with CCDs are encouraged to follow-up its development, possibly using some red or infrared filters, in order to reduce the contribution of the gas coma and the ion tail.

We imaged again periodic comet 6P/d'Arrest on 2008, July 11.96, from the Remanzacco Observatory (click on the image for a bigger version): 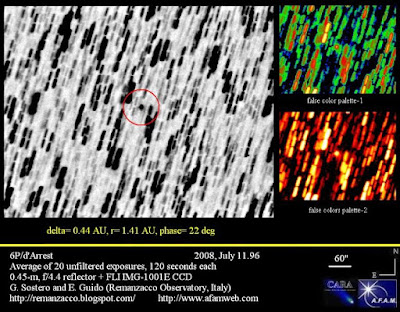 Image processing show the possible presence of a tiny coma, nearly 20 arcsec in diameter. The crowded stellar field hampers a sure identification of this feature, however this faint "halo" moves with the proper motion of the comet; moreover, the FWHM of the comet appears to be significantly larger compared to that of neary field stars of similar brightness, and this seems to confirm the presence of a detectable coma. The brightness of the comet has been measured at about magnitude 15 (Ru). This is still somehow fainter compared to the ephemerides (that indicates instead a visual total magnitude m1 equal to about magnitude 14), however we do know that i) CCDs magnitudes are frequently fainter than visual magnitudes and ii) the lightcurve of 6P/d'Arrest is known to show a striking asymmetric lightcurve, with lower pre-perihelion brightness. The Afrho parameter is still rather low (about 16-cm for a radius of nearly 3,000 Km at the comet distance).

Updated ephemerides are available (as always) at the Minor Planet Center website.

Comet Lulin show a nearly circular coma, about 30 arcsec in diameter, slightly elongated toward North-West. Photometrically the coma show a very uniform profile, a kind of "disk", of nearly uniform brightness; just the outermost ~ 5 or 10 arcsec being very faint compared to the central part. This outlooking reminds somehow the aspect of 17P/Holmes shortly after its 2007 outburst (however this doesn't mean necessarily that these two comets share the same behaviour: it's just a morphological evidence!).

This is a link to the false colors image:
http://tinyurl.com/5n8f96

show clearly the unusual photometric morphology of the coma.

The total magnitude turned out to be Ru~ 12,7. Since we operated unfiltered, in our case the afrho parameter (proxy of the dust abundance within the coma) determination has just to be considered an upper limit; anyway it turned out to be a fairly high value, close to ~ 1,500 cm.

We acknowledge the use of the C.A.R.A. algorithms for the image processing (developed by Martino Nicolini) and the afrho calculations (develped by Roberto Trabatti).