During the months of October 2016, 3 new comets were discovered. "Current comet magnitudes" & "Daily updated asteroid flybys" pages are available at the top of this blog (or just click on the underline text here).

Oct 17 The third-largest object known beyond Neptune, 2007 OR10, has a moon. The discovery was reported in a poster by Gábor Marton, Csaba Kiss, and Thomas Mueller presented at the joint meeting of the European Planetary Science Congress and the Division for Planetary Sciences of the American Astronomical Society (DPS/EPSC) in Pasadena, California. The Hubble Space Telescope took the photo below of 2007 OR10 on September 18, 2010. Later analysis of the images revealed the presence of a moon (red circle). 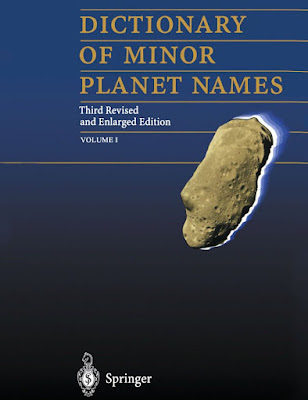 Oct 27 Catalog of Known Near-Earth Asteroids Tops 15,000, with an average of 30 new discoveries added each week. This milestone marks a 50 percent increase in the number of known NEAs since 2013, when discoveries reached 10,000 in August of that year. The 15,000th near-Earth asteroid is designated 2016 TB57. It was discovered on Oct. 13 by observers at the Mount Lemmon Survey. 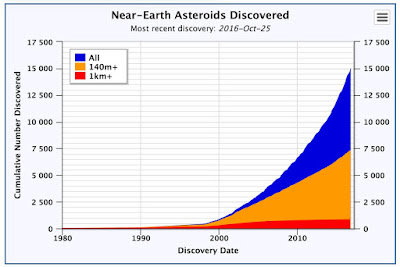 Oct 29 #TeamRadar at Arecibo imaged binary asteroid 2003 YT1 on the morning of Oct 29, 2016. Asteroid 2003 YT1 was discovered by the Catalina Sky Survey in December 2003. This asteroid approached within 0.035 au (13.5 lunar distances) on October 31. Radar observations at Arecibo in May 2004 revealed that this is a binary system with a rapidly-rotating primary and a secondary whose orbital and rotation periods appear to be asynchronous.  The primary has a rotation period of 2.34 h and the upper bound on the rotation period of the  secondary is about 6 h. In the new obtained image below, the faint smudge at the top is the satellite moving in its orbit over 2 hours.


by Ernesto Guido
Pubblicato da Team a 2:29 PM No comments: