During the month of June 2016,  2 new comets were discovered and there was 1 comet recovery. A small asteroid, 2016 HO3, has been discovered in an orbit around the sun that keeps it as a constant companion of Earth, and it will remain so for centuries to come. On June 2nd a small asteroid (1-3 meters wide) hit Earth's atmosphere and exploded over Arizona. Amateur astronomer and comet discoverer Rolf G. Meier died on June 26th, 2016 after a short battle with cancer. "Current comet magnitudes" & "Daily updated asteroid flybys" pages are available at the top of this blog (or just click on the underline text here). 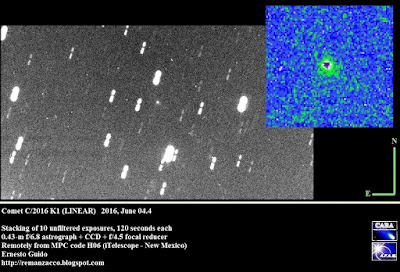 June 02 On June 2nd at 3:56 a.m. local (MST) time (10:56 UT), a small asteroid (estimated diameter about 1-3 meters) hit Earth's atmosphere and exploded over Arizona. The airburst shook the ground below and produced a flash of light 10x brighter than a full Moon. A week later, one of Arizona State University’s top meteorite experts was off on a team expedition in the Arizona wilderness on an Apache homeland, braving bug bites, bears and mountainous terrain. After three nights camping and 132 hours of searching, the team found 15 meteorites, ranging in size from a medium-sized strawberry to a pea. A video with more info on this expedition is available here.

June 15 A small asteroid, 2016 HO3, has been discovered in an orbit around the sun that keeps it as a constant companion of Earth, and it will remain so for centuries to come. This asteroid, first spotted on April 27, 2016, by the Pan-STARRS 1 survey, measures between 40 and 100 meters (120 to 300 feet) in diameter and it poses no threat to Earth.  As it orbits the sun, this new asteroid, designated 2016 HO3, appears to circle around Earth as well. It is too distant to be considered a true satellite of our planet, but it is the best and most stable example to date of a near-Earth companion, or "quasi-satellite."

It became a quasi-satellite about a century ago, and will follow our planet around the Sun for the next three centuries, looping around us once a year. Its yearly loop will then unhook from Earth, starting to follow a horseshoe path with respect to our planet, which will last for several millennia. In this animated picture below by A. Vitagliano, the frame is rotated synchronously with the revolution of Earth, which therefore moves along the short green segment located 1 AU above the Sun, while the other inner planets are hidden. The yellow loop represents one yearly path of the asteroid, and each frame is taken at 1 year intervals for a total span of 999 years.

by Ernesto Guido
Pubblicato da Team a 2:44 PM No comments: