On 2010, Oct 28.47, we were able to secure some additional follow-up about the faint returning comet 164P/Cristensen. The images were obtained through the Faulkes Telescope South (Siding Spring, Australia), a 2.0-m f/10.0 Ritchey-Chretien + CCD.

At the time of our observation the comet was about 70 deg above the horizon, in a moonless sky. Under good seeing conditions (FWHM of nearby field stars about 1 arcsec) we stacked several R filtered exposures, 60-sec each, and found the comet moving at the expected postion: 164P/Christensen was a starlike object, at about magnitude R~ 20. 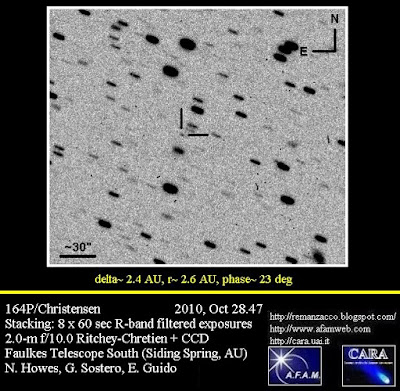 Its measured astrometry was in good agreement with our previous recovery data batch of 2010, Oct 7 and 11 (see our previous post here).

We kindly acknowledge the Faulkes Telescope Project for the telescope time we used.

Please click on the thumbnail for the bigger version (~15MB size):

While this is a composite image obtained by adding 15x10sec exposures images: 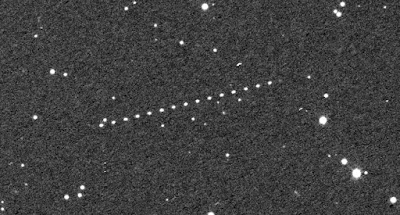 When we shoot our image this rock was at 0.030 AU from Earth and speeding at about 30"/min, shining at about magnitude 12.3. At the moment of its close approach on October 30, this object will be moving roughly at 160"/min.

A new bright comet (designated SOHO-1932) diving into the Sun has been discovered on Oct. 19th by Bo Zhou using the images taken by SOHO spacecraft. This object belong to the famous Kreutz-group comet, a family of sungrazing comets that are named after German astronomer Heinrich Kreutz who first studied them in the details. These comet fragments passes extremely close to the Sun at perihelion and usually they completely evaporated during such a close approach. 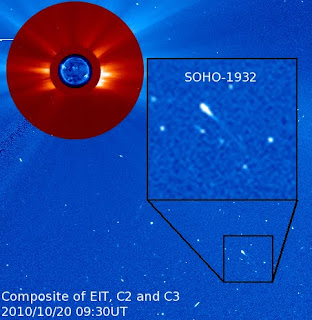 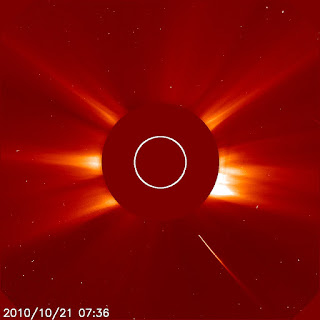 by Ernesto Guido
Pubblicato da Team a 3:06 PM No comments:

Analysis of two different series of 10 unfiltered stacked images, 120-seconds each, showed that this object appeared non-stellar. Through our images, we were unable to discriminate a definitive coma, however we measured on both nights its FWHM nearly 40% wider compared to that of nearby field stars of similar brightness, indicating a slightly diffuse nature at the threshold limit of our instrumental set-up and seeing conditions.

In our stackings of both nights, there was also a hint of elongation in a south-west to north-east direction (or the other way around, not easy to tell), while the field stars had an ordinary symmetrical profile. This might indicate the presence of a little tail or elongated coma, below our resolving power for that night (and, indeed, the discoverer reported a thin tail about 15"-20" long in p.a. 240 deg).

Our confirming image (click below for a bigger version): 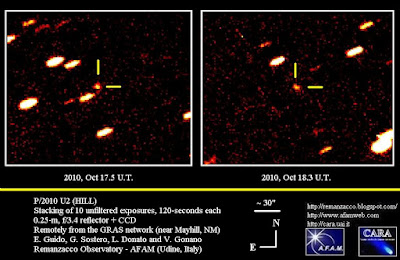 This object was previously reported in a "one stand" night of observations by the "La Sagra" sky Survey, with observations dating back to 2010, oct. 1.1

On 2010, Oct.11 the seeing conditions at Moorook (Australia) were exceptional, so we had the chance to identify the comet at the very limit of our capabilities, as a faint dot of light (magnitude about 20.4). Then, knowing where to look for, we searched in our archive images, and found it again in our stackings of 2010, Oct. 7; then we had the astrometry over two nights, that was fitting pretty well the expected orbit of 164P.

However comet 164P/Christensen is much fainter (more than 3 magnitudes) compared to the predictions.

Our recovery image (details on image): 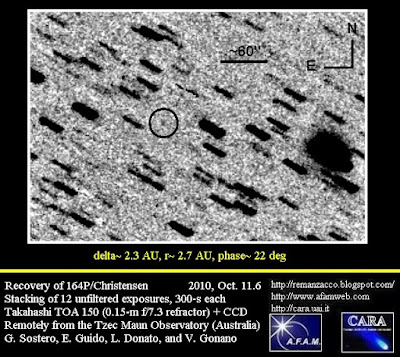 According to NASA JPL website, this small object is estimated to be about 5 to 10 meters wide. 2010 TD54 has zero probability of impacting Earth. Anyway objects of these size are expected to burn up high in the atmosphere and cause no damage to Earth's surface.

Below you can see a single 120-second exposure showing the asteroid as a trail among the field stars: 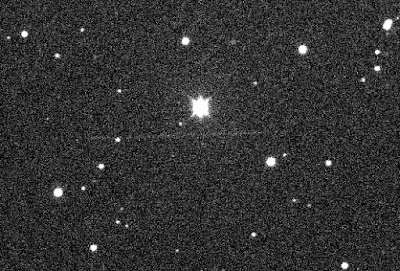 When we shoot our image this rock was speeding at about 220"/min, shining at about magnitude 15.6

IAU circular No. 9172, issued on October 05, 2010, announces the discovery by R. H. McNaught of a diffuse comet on CCD images obtained with the 0.5-m Uppsala Schmidt telescope. After posting on the Minor Planet Center's NEOCP webpage, some observers have commented on the cometary appearance of this 18.5 magnitude object, designated P/2010 T1 (McNAUGHT).

We have been able to confirm this object remotely, using a 0.15-m f/7.3 refractor at the Tzec Maun Observatory (near Moorook, Australia): on October 5.6, co-adding of 16 unfiltered exposures, 300-seconds each, shows a coma nearly 7-arcsec in diameter with a central condensation, and a broad fan-shaped tail about 12-arcsec long toward PA 310.

Our confirming image (click below for a bigger version): 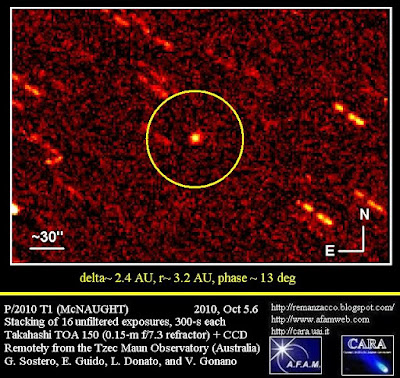 This is the 57th comet discovered by McNaught.