IAU circular No. 9170, issued on September 24, 2010, announces the discovery by the LINEAR survey of an apparently asteroidal object found to show cometary appearance by other CCD astrometrists. The discovery observation was obtained by LINEAR on Sept. 21.3 UT with a 1.0-m f/2.15 reflector + CCD. After posting on the Minor Planet Center's NEOCP webpage, some observers have commented on the cometary appearance of this 18 magnitude object, designated C/2010 S1 (LINEAR).
We have been able to confirm this object remotely, through the GRAS network, using a scope located in Mayhill (NM): 0.25-m, f/3.4 reflector + CCD.: on Sept. 24.3, co-adding of 18 unfiltered exposures, 120-seconds each, show that this object appears soft compared to nearby field stars of similar brightness with a slight elongation in the east-west direction.

Our confirming image (click on the image for a bigger version): 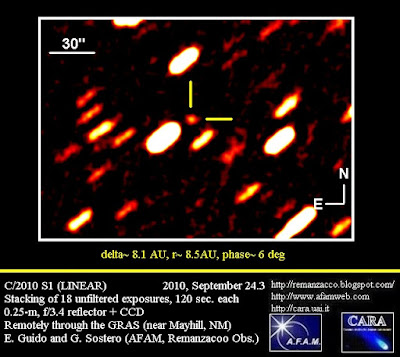 According to COCD website, this is the 199th comet discovery for LINEAR.

IAU circular No. 9169, issued on September 20, 2010, announces the discovery by La Sagra Sky Survey (LSSS) of a new comet on Sept. 14.9 UT with a 0.45-m f/2.8 reflector. After posting on the Minor Planet Center's NEOCP webpage, some observers have commented on the cometary appearance of this 18.4 magnitude object, designated P/2010 R2 (LA SAGRA).

We have been able to confirm this object remotely, using a 0.15-m f/7.3 refractor at the Tzec Maun Observatory (near Moorook, Australia): on Sept. 17.6, co-adding of 12 unfiltered exposures, 300-seconds each, show a condensed coma nearly 10-arcsec in diameter.

Our confirming image (click on the image for a bigger version): 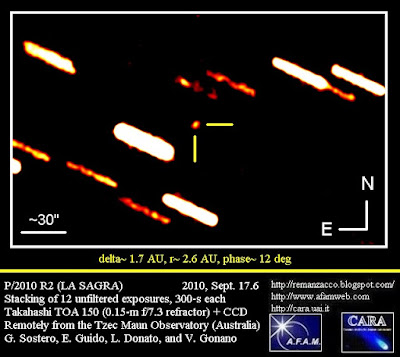 This is the 4th discovery for the amateur survey La Sagra. Congratulation to the LSSS team members. The full discovery story has been posted on LSSS website.

We performed the second night of follow-up on September 13, 2010. In our stackings the comet appears shows a narrow tail about 15-arcsec long toward PA 267

Our recovery image (details on image): 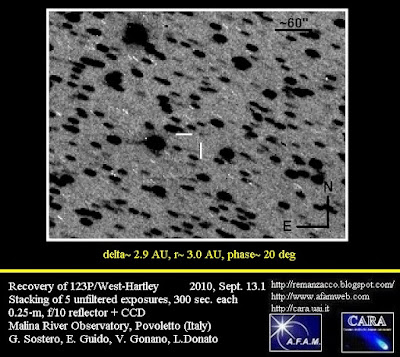 Please click on the image for a bigger version.

Although both objects are coming inside the orbit of the Moon, there is no danger of impact!! (anyway objects of these dimensions would mostly burn up in the Earth’s atmosphere in case of an impact)

While below you can see a single 120-second exposure showing the asteroid as a trail among the field stars: 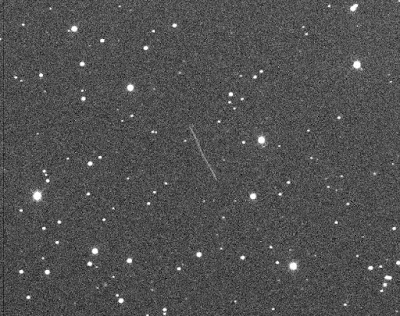 When we shoot our image this rock was speeding at about 31 deg/day, shining at about magnitude 15.