This weekend, Earth passed through a stream of debris from 3200 Phaethon. In 1983 Whipple identified Phaethon like the parent of Geminid meteor stream. But it has never displayed unambiguous cometary activity.

The Geminids provide the most impressive meteor display of any of the annual showers.

Bill Cooke of NASA's Meteoroid Environment Office, prepared a plot showing how the shower has intensified since its discovery. Jupiter's gravity has been acting on Phaethon's debris stream, causing it to shift more and more toward Earth's orbit: 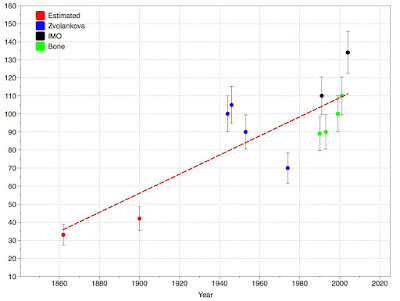 Preliminary counts from the International Meteor Organization (IMO) shows that the Geminids meteors reached a ZHR (max) ~ 130/150 around 20/21 UT of Dec. 13, so roughly 8/9 hours before the predicted peak scheduled for around 5 UT of Dec. 14. Radio meteor observations all over the world seems to confirm that the peak arrived 4/5 hours early on the predictions:

Our meteorcam, located in Castellammare di Stabia (Italy), imaged 44 meteors (35 were Geminids) on 12/13 December, one day before the peak. Unfortunately clouds prevented us to follow the Geminids through the maximum rate. These are a composite image (because the images were collected over several hours, the radiant of the shower is spread out) + animation: 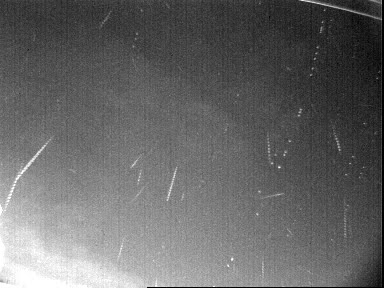 The all-sky camera of Cloudbait Observatory (Colorado, Usa) recorded 419 Gemind meteors between sunset on December 9 and sunrise on December 14 (232 on on the peak night of December 13/14).


by Ernesto Guido
Pubblicato da Team a 10:39 PM No comments:

After the Utah Fireball on Nov. 18, another bright fireball has been seen over South Africa aroud 11pm local time of Nov. 21, 2009. The meteor was spotted by dozens people as it passed over Johannesburg and Pretoria in Kauteng province on Saturday. Below the footage from a security camera in Burgersfort in the Limpopo Province:


by Ernesto Guido
Pubblicato da Team a 11:04 PM No comments: