Below you can see the comets we imaged on 2013, September 24.6 through the 2.0-m f/10.0 Ritchey-Chretien + CCD of Faulkes Telescope South (MPC code E10 - operated by Las Cumbres Observatory Global Telescope Network). Click on the images for a bigger version (details are in the caption of each photo). 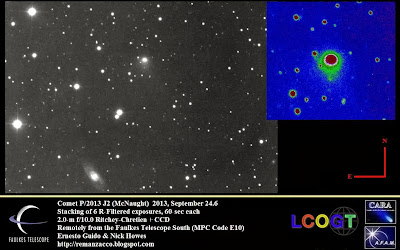 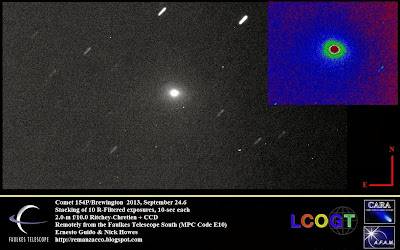 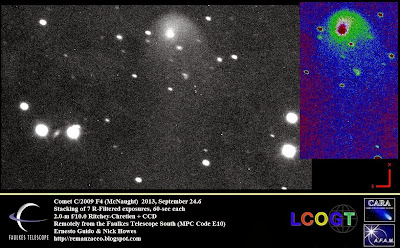 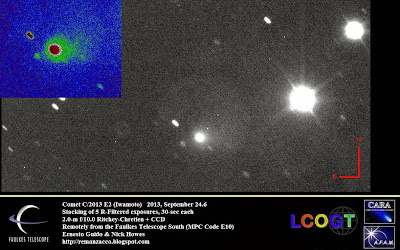 We performed follow-up measurements of this object, while it was still on the neocp.  Stacking of 10 unfiltered exposures, 60-sec each, obtained remotely from MPC code Q62 (iTelescope Observatory, Siding Spring) on 2013, September 08.7, through a 0.32-m f/9.0 Ritchey-Chretien + CCD, shows that this object is a comet: sharp central condensation surrounded by a coma about 25" in diameter and a tail about 40" in PA 245.

Below our confirmation image. Click on it for a bigger version. 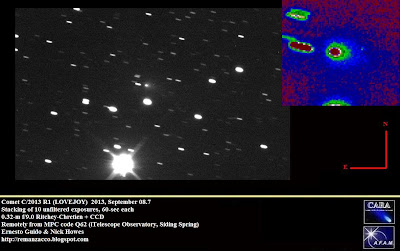 Below you can see a graph generated using the software Orbitas and showing the predicted magnitude (in red) versus the elongation. Click on the image for a bigger version. (A word of caution: as always with comets, the future magnitudes reported here are only indicative).

You can read here the discovery story written by Terry Lovejoy.

by Ernesto Guido & Nick Howes
Pubblicato da Team a 12:47 AM No comments:

Recently we installed an All-Sky camera on Mount Matajur Observatory - Italy (MPC Code B68). This all-sky camera is the first step toward remote observing from Matajur Observatory as it will be very important to check the sky conditions before the observing sessions and to image transient phenomena like yesterday fireball. While the camera is still in the testing phase, it has been able to image the flash by this bright fireball. See our video below showing the flash from the fireball and the frames just before and after the event. Click on the thumbnail for a bigger version.

Below you can see an image & video of this Fireball imaged from Ferrara by a meteor-cam station of IMTN ( Italian Meteor and TLE Network ) group.

Some witnesses in the Veneto region have reported hearing sounds (such as explosions) after the passage of the fireball.

On the same night, at 02:26 local time (00:26 UT) - 14 minutes after the Fireball - our All-Sky camera imaged another bright meteor. You can see the image and the animation below (click here or on the thumbnail for a bigger version). 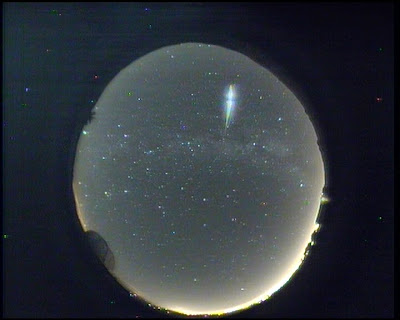