Cbet nr. 3548, issued on 2013, June 09, announces the discovery of an apparently asteroidal object (discovery magnitude ~19.6)  by R. A. Kowalski on CCD images obtained with the Catalina Sky Survey 0.68-m Schmidt telescopeon June 02.  After posting on the Minor Planet Center's NEOCP webpage, this apparently asteroidal object as been found to show cometary features by by astrometric observers elsewhere. The new comet has been designated C/2013 L2 (CATALINA).

We performed follow-up measurements of this object, while it was still on the neocp. Stacking of 18 R-filtered exposures, 30-sec each, obtained remotely, from the Haleakala-Faulkes Telescope North on 2013, June 04.5, through a 2.0-m f/10.0 Ritchey-Chretien + CCD (operated by Las Cumbres Observatory Global Telescope Network), shows that this object is a comet: sharp central condensation, surrounded by a faint coma nearly 4" in diameter.

Below you can see our image. Click on it for a bigger version. 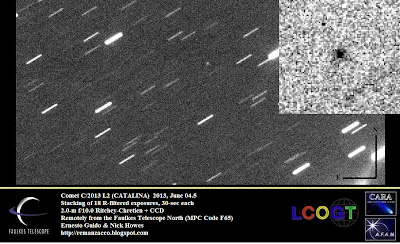 by Ernesto Guido & Nick Howes
Pubblicato da Team a 11:03 AM No comments:

On our images taken on June 03.7, 2013 we can confirm the presence of an optical counterpart with unfiltered CCD magnitude 11.5 at coordinates:

Our annotated confirmation image (click on it for a bigger version). North is up, East is to the left: 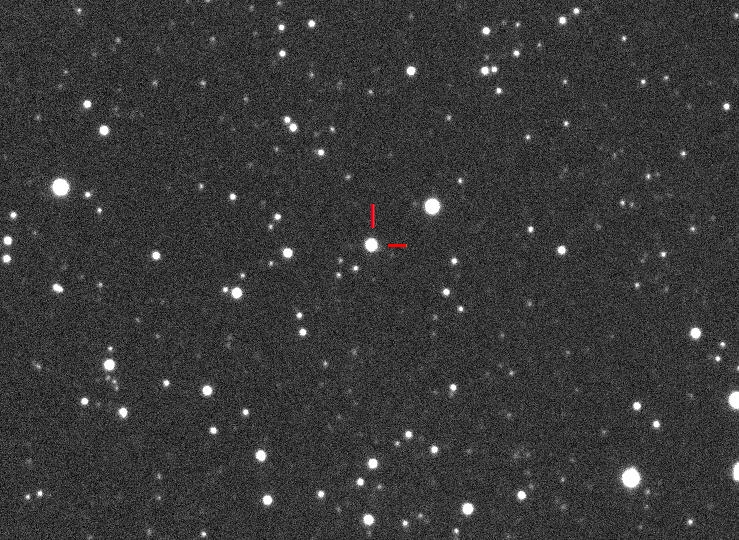 An animation showing a comparison between our confirmation image and the archive POSS2/UKSTU plate (R Filter - 1996). Click on the thumbnail for a bigger version: