During the 3-month period January through March 2018, 12 new comets were discovered, cometary activity was detected for 3 previously discovered object (earlier designated as an asteroid) and there  were 2 comet  recoveries. "Current comet magnitudes" & "Daily updated asteroid flybys" pages are available at the top of this blog (or just click on the underline text here). See below for the "Other news" section. 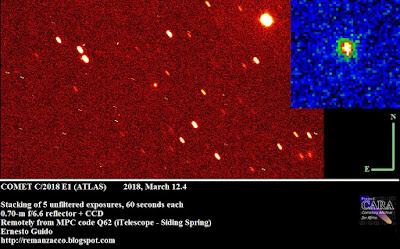 
* The prefix for  this object is being changed from A/ to C/, following the receipt of the following message from M. Micheli: "We obtained two 60-secondr-fi ltered exposures of A/2018 C2 using the Canada-France-Hawaii Telescope on2018 March 22.6 UT. The queue observer was David Woodworth.  The object iscometary, displaying a broad faint tail of about 10" toward the West. The comais only marginally extended, with a FWHM of 0.9" compared to 0.8" of nearbystars." (ref. M.P.E.C. 2018-F136).

Jan 24 Radar images of near-Earth asteroid 2018 AJ  by @AreciboRadar show an elongated body, about 60m x 120m with a considerable brightness variations as it rotates every 45 minutes.

Feb 05 RIP Yoshihide Kozai (1928 - 2018), Japanese astronomer specialising in celestial mechanics. He is best known for discovering, simultaneously with Michael Lidov, the Kozai mechanism, for which he received the Imperial Prize of the Japan Academy in 1979.

Feb 08 3.79 billion miles from Earth, New Horizons snapped these images of a pair of Kuiper Belt objects, making them the farthest images ever taken by a spacecraft!

"These December 2017 false-color images of KBOs 2012 HZ84 (left) and 2012 HE85 are, for now, the farthest from Earth ever captured by a spacecraft. They're also the closest-ever images of Kuiper Belt objects".

Feb 09 Image & Animation of @SpaceX "2018-017A" a.k.a. #Starman #TeslaRoadster #FalconHeavy #astronomy #spacex. Click on the thumbnails below for a bigger version. 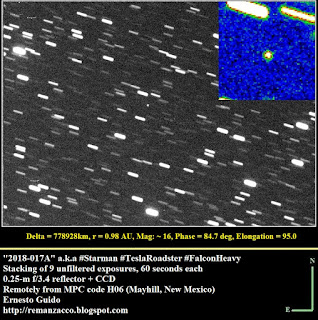 
by Ernesto Guido
Pubblicato da Team a 1:21 PM No comments: