During the month of July 2017, 2 new comets were discovered and cometary activity was detected for 1 previously discovered object (earlier designated as an asteroid). "Current comet magnitudes" & "Daily updated asteroid flybys" pages are available at the top of this blog (or just click on the underline text here). See below for the "Other news" section. 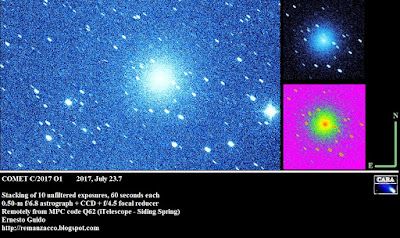 Jul 07  New paper on Arxiv by Kokotanekova et al.: "Rotation of Cometary Nuclei: New Lightcurves and an Update of the Ensemble Properties of Jupiter-Family Comets"