Comet 7P/Pons-Winnecke is currently approaching the Sun, during its journey to the inner Solar System. On 2008, March 25.9 we imaged it from the Remanzacco Observatory (Italy): after weeks of bad weather, a storm finally cleared up the sky, so we were able to perform some follow-up of this faint comet, while it was slowing moving in Ursa Major.

In our stacking (average of 20 unfiltered exposures, 120 seconds each, through a 0.45-m f/4.4 reflector + CCD) the comet appears starlike (no coma or tail are visible; same FWHM of the field stars): 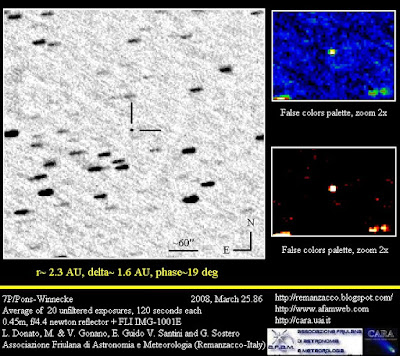 We performed a preliminary photometric analysis, that returned a magnitude of R~ 19.5; at this low level of activity, the afrho parameter (proxy of the dust abundance within the coma) is dominated by sunlight scattered by the nucleus, so it doesn't have a straightforward interpretation (just for the record, its current value is close to a few cm).


This comet has been related to the June Bootids meteor stream, that was pretty active during some of the comet's passages in the first quarter of the past century. However the current activity of this meteor shower is rather modest, probably because the gravitation influence of Jupiter changed significantly the orbital path of the comet and its associated meteoroid debris.

We peformed some follow-up of this object by means of a remotely controlled scope of the "RAS" network (details on image; click on it for a bigger version): 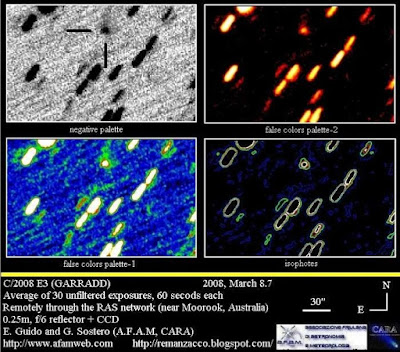 In our stacking we can appreciate a coma nearly 10 arcsec in diameter, with a strong central condensation. Through strong enhancement of the visualization parameters, a faint and extended outer halo nearly 20arcsec in diameter, possibly elongated toward North-West, seems to be visible (however it must be said that in our frames this detail is very close to the background noise, and thus must be considered as uncertain).

It's also possible to see a faint and broad tail, extending nearly 20 arcsec toward North. We measured the central condensation as m2 almost 18.4, while the 10 arcsec coma has an m1 nearly 17.7 (both are unfiltered CCD magnitudes, approximated to R).

A preliminary afrho (proxy of dust abundance within the coma) measurement provides a value close to 450 +/- 100 cm; this seems to point toward a pretty active comet, considered that it's current distance from the Sun is r~ 5.5 AU.

The Minor Planet Center database points to a (preliminary) retrograde parabolic orbital solution with an inclination on the ecliptic plane of i~ 107 degrees; perihelion will be reached at the end of next October, at 5.2 AU from the Sun.

C/2008 E3 (GARRADD) will remain a southern hemisphere object, and it's not supposed to get significantly brighter than magnitude 17.

According the report of several astrometrist that performed its follow-up, this object is rather faint (nearly magnitude 19) and is currently showing a small coma, 6 to 12 arcsec in diameter, elongated toward North-East.

We imaged it remotely from Mayhill, NM (details on image; click on it for a bigger version): 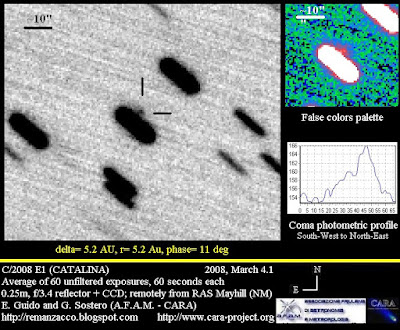 This comet is not supposed to get any brighter than V~17, so it shoud remain a rather unconspicuous object, in spite of the fact that it has a significative absolute magnitude, since we are currently observing it at Jupiter's distance.