The planetary satellites can be distinguished into two characteristic groups: regulars and irregulars. Satellites are classified as  “irregular” when their orbits are large, highly elliptical and tilted with respect to the equators of their host planets. In contrast, so-called regular moons, such as Earth’s or the large Galilean satellites of Jupiter, are characterized by small values of semi-major axis, eccentricities and inclinations. Moreover, most of the irregulars  have retrograde orbits, which means they move around their host planet in a direction opposite to the sense of the  rotation of the planet. While in contrast, regular moons have prograde orbits. Another important characteristic of the irregular ones are the family groups, i.e., satellite groups characterized by similar orbital elements.

This difference can be traced directly to different modes of formation. Whereas the regular satellites grew by accretion within circumplanetary disks, the most plausible hypothesis to explain the origins of the irregular satellites is that they formed elsewhere and were captured by  the planet from initially heliocentric orbits at an early epoch. While different capture mechanisms have been suggested (Gas drag capture; Pull-Down capture; Close-approach interaction captures; Capture of binary-asteroids) these bodies are still not well explained by standard models. Studying the origins of irregular satellites is an important piece in the development of the theory of Solar System formation.

Yesterday we imaged 2 irregular satellites of Jupiter: Himalia (Jupiter VI) and Elara (Jupiter VII), both belonging to the "Himalia group". Images were obtained remotely, from H06 (ITelescope network near Mayhill, NM) on 2012, Nov. 22.34, through a 0.25-m f/3.4 reflector + CCD.

Below you can see a diagram showing the semimajor axis scaled to the Hill sphere radius versus orbital inclination, for the irregular satellites of the giant planets known as of November 1, 2006. Also showed is the Himalia group with inclinations between 26.6° and 28.3°, and eccentricities of between 0.11 and 0.25.


Below our image (stack of 10x60seconds exposures) showing both Himalia (magnitude 14.8) and Elara (magnitude 16.1). The bright light in the left  corner is from Jupiter. North is up and East is to the left. Click on the image for a bigger version. By clicking here you can see the version without the windows zoom on the satellites. 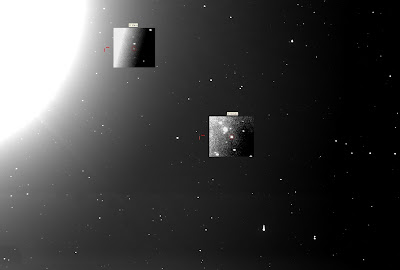 The graph below (elaborated on IMCCE website) shows the position of Jupiter satellite with respect to Jupiter at the moment of our imaging session. Himalia and Elara are the yellow marked dots. North is up and East is to the left. Click on the image for a bigger version. 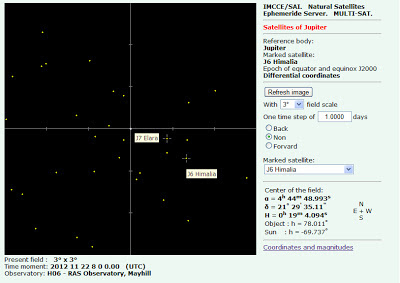 Zoom on Himalia & Elara. Click on the image for a bigger version.

Below you can see an animation (spanning about 20 minutes) showing the movement of Himalia. Click on the thumbnail for a bigger version:

Below you can see an animation (spanning about 20 minutes) showing the movement of Elara. Click on the thumbnail for a bigger version:

Ernesto Guido & Nick Howes, for our friend/colleague Giovanni Sostero, who inspires us always, waiting for his recovery.
Pubblicato da Team a 2:07 PM No comments:

We performed some follow-up measurements of this object, while it was still on the neocp. Stacking of eleven unfiltered exposures, 120-sec each, obtained at the Remanzacco Observatory (Udine) on 2012, Nov. 7.8, through a 0.45-m, f/4.4 reflector + CCD, shows that this object is a comet: compact coma about 10" in diameter.


Our confirmation image (click on the image for a bigger version): 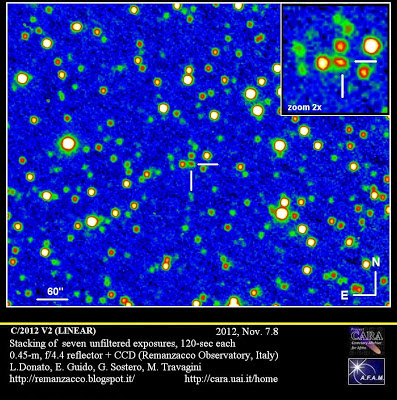 Stacking of 26 R-filtered exposures, 35-sec each, obtained remotely, from the Haleakala-Faulkes Telescope North on 2012, Nov. 2.4, through a 2.0-m f/10.0 Ritchey-Chretien + CCD, under good seeing conditions, confirms the presence of a secondary nucleus, or fragment, now placed about 3.3" in PA 165 with respect to the main central condensation of comet 168P. This fragment is now fainter, compared to our previous Oct. 26.4 detection, having R magnitude about 18.7; its diameter is still about 2", but now it appears more diffuse, without a clear central condensation (this hampers a precise determination of its photocenter). This fragment appears to have developed its own tail, nearly 4" long in PA 113 (about parallel to the main tail originating from the central condensation of 168P).

Below you can see our rendition of today imaging session. Through some image processing, the tail of the fragment became easily visible. Click on the image for a bigger version. 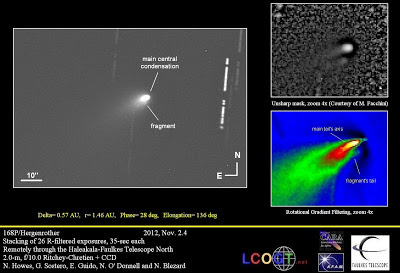 Below you can see an animation obtained using the school's imaging frames. (North to the top, East to the left). The animation covers about 25 minutes in total. Click on the thumbnail for a bigger version.

Below you can find the astrometry lines (0168P: main nucleus of comet Hergenrother, 168Pb the fragment):

A blog entry (posted on their blog on Oct 31st) by the WIYN telescope group, who were testing the new ODI instrument, showed the comet with the fragment clearly. Below you can see their image obtained on October 30.

Our team would like to thank Queens College and The Dollar Academy (Adam Shannon) for their superb observations and we have included them in our submissions to the minor planet centre (PI at each school) and will reference their inclusion in our ongoing project to look at the dust/continuum values of this very interesting cometary event.

After the publication of our post with the discovery image & info of the splitting of comet 168P, the news spread and some of the largest telescopes in the world were pointed to the comet. On JPL website has just been published this image captured by the 8.1m NOAO/Gemini North telescope on Nov. 2, 2012 at about 6 a.m. UTC and showing in great details the near nucleus area and "at least four distinct pieces".

Below you can see our rendition of a series of images obtained by Maui Community College on 2012 November 03, through the 2-meter Faulkes Telescope North. Click on the image for a bigger version. 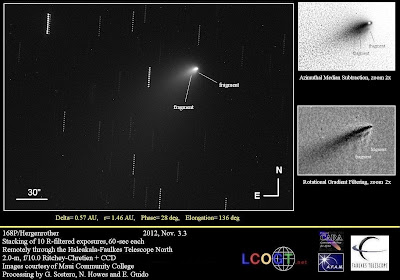 The fragment we found Oct. 26 appears increasingly weak and undefined, while it is maintaining its tail. A second fragment, observed by the Gemini North, is possibly visible in this image too, though he is just above the noise level of the image. Please see the following image (image processing by Mauro Facchini). 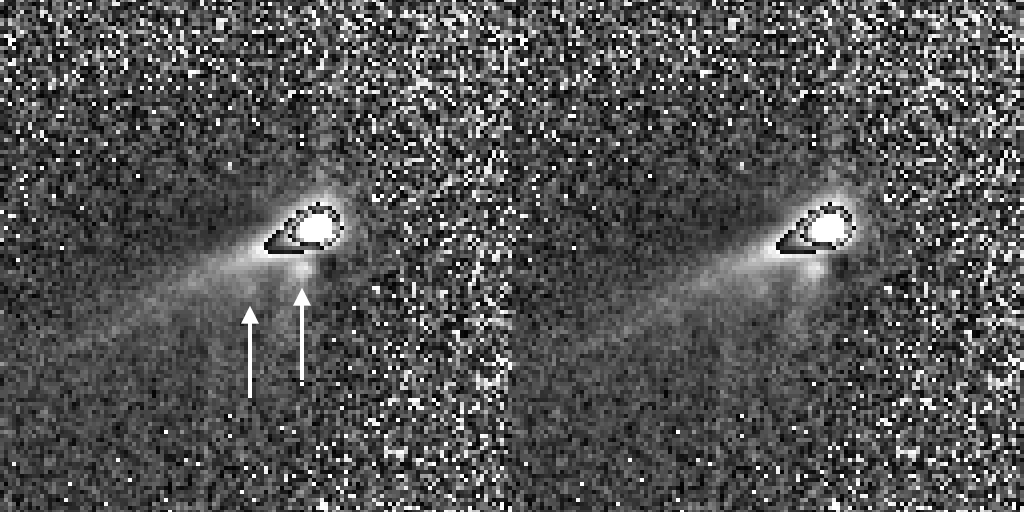 After some significative image-processing, in the stacking below there might be some evidence of a possible third fragment, tailward of the previous two (about 13" in PA 120 respect the central condensation of the comet); however its reality has still to be confirmed, due to its low signal/noise in the original images, so further follow-up on it it's needed to confirm or discard its presence. 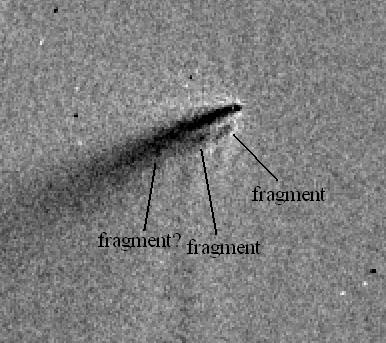 Today the "Istituto Nazionale di Astrofisica" (National Institute for Astrophysics), or INAF for short published a short summary of the splitting event with an interview with our team's Giovanni Sostero on the 168P comet story (in Italian).

Comparison of two consecutive sets of images counting, respectively, twelve R-filtered exposures, 70 seconds each, and fourteen R-filtered exposures, 60 seconds each, obtained remotely (by G. Sostero, K. Rochowicz, P. Phelps, N. Howes, E. Guido), from the Haleakala-Faulkes Telescope North on 2012, Nov. 7.43 and Nov. 7.45 under not good seeing conditions, through a 2.0-m f/10.0 Ritchey-Chretien + CCD, shows that the fragment we reported on Oct. 26.4 and Nov. 2.4 now is not visible anymore (limiting magnitude about 20).

On today's stackings, we noticed, instead, the possible presence of a second, extremely weak, fragment, having R about 19.5, placed nearly 8.4" in PA 142 respect to the main central condensation of 168P. This second fragment appears to be visible, in nearly coincident positions, also on images obtained by R. Stevenson through the Gemini North telescope on 2012, Nov. 2.25 and on stackings obtained by the Maui Community College at the Haleakala-Faulkes Telescope North on 2012, Nov. 3.3. Due to its extreme faintness, we were prevented to calculate any reliable astrometric position for it, on the stackings we obtained today. 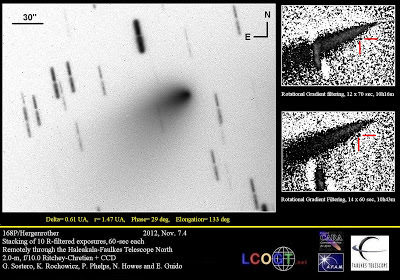 Moreover the central condensation today appears a bit fuzzy and wider compared to four days ago (see image below; click on it for a bigger version). We will perform further follow-up to verify that this evolution is genuine, and not an effect of temporary bad seeing conditions. 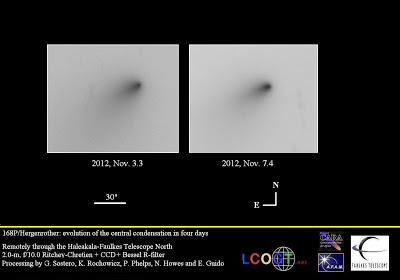 Paper by Z. Sekanina (JPL) about comet 168P fragmentation has been published on Arxiv with acknowledgement to our discovery and mention to this blog: 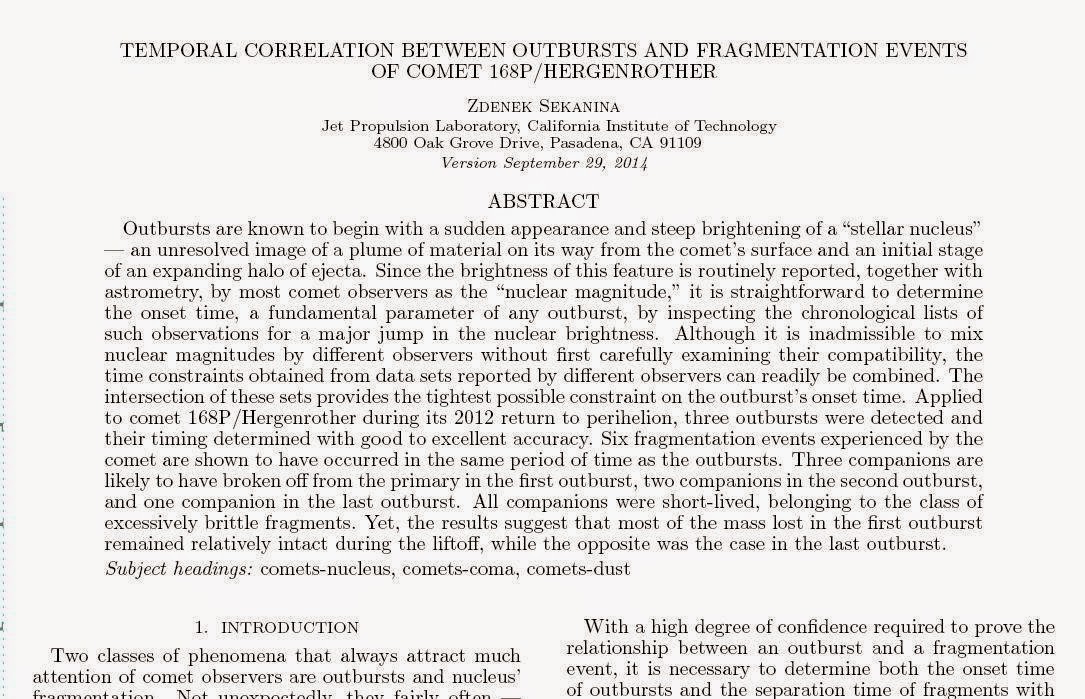