The Ursids meteor shower is usually a minor shower with ZHR < 10 which has produced outburst in 1945, 1982 and 1986. As this is a very poorly-observed shower, other similar events could easily have been missed due to poor weather or too few observers active.

It was discovered during the outburst of 1945 even if a first mention of this shower is found on a 1914 paper by Denning. 8P/Tuttle is the parent comet.

The 2008 Ursids peak was expected on 22 December. Thanks to good weather, our meteorcam captured many Ursids on the morning of 22 December. Below you can see the photo and the video of the brightest one: 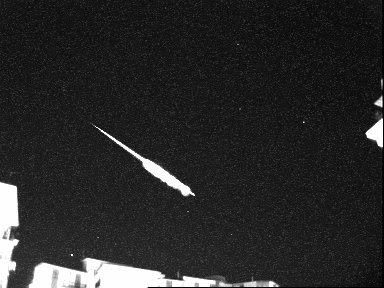 Meteor Camera and one nice fireball

A couple of months ago we started to work on an automatic meteor detection system to be installed in Castellammare di Stabia, Italy. A special camera is linked to a software for the automatic detection of video meteors. More details about the setup in a next post.

On the very first evening, our meteorcam recorded this nice -4 magnitude fireball. The fireball appeared over Castellammare di Stabia at 21:51 local time of 07 December 2008:

by Ernesto Guido
Pubblicato da Team a 12:40 AM 2 comments: