IAU circular No. 9132, issued on 2010, March 26, announces the visual discovery by Don Machholz of a comet (the magnitude given as 11.5-12) on Mar. 23 using a 47-cm reflector in the course of his comet-hunting program, designated C/2010 F4 (MACHHOLZ). After posting on the Minor Planet Center's 'NEOCP' webpage, three Japanese amateurs have reported confirmation of the new comet. 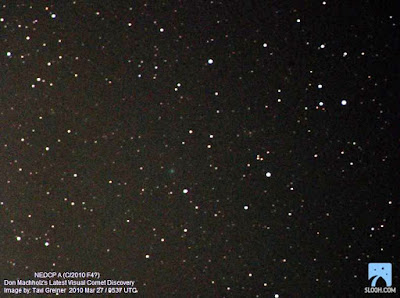 
The first and preliminary orbit for comet C/2010 F4 (MACHHOLZ) indicates perihelion on Apr. 05, 2010, at about 0.6 AU. Comet C/2010 F4 (Machholz) is currently 11th magnitude and probably it will not get much brighter. According to the preliminary orbit the comet will be in conjunction with the Sun in early April, and although in the evening sky thereafter it will be at a small elongation and so it will probably be lost in the Sun's glare after mid-April.

The full discovery story is online on Don's website.

Congratulations to Don for this great achievement in these times of professional survey programs and spacecrafts!!!

by Ernesto Guido
Pubblicato da Team a 11:42 AM No comments:

IAU circular No. 9127, issued on 2010, March 17, announces the discovery by J. V. Scotti of a new comet on Mar. 14, 2010, in the course of the Spacewatch survey. After posting on the Minor Planet Center's NEOCP webpage, many observers have noted the cometary appearance of this 19.5 magnitude object, designated C/2010 E5 (SCOTTI).

We have been able to confirm this object remotely, through the GRAS network, using a scope located in Mayhill (NM): on 2010, March 17.4, co-adding of 20 unfiltered exposures, 120-seconds each obtained by means of a 0.25-m, f/3.4 reflector + CCD, show a coma nearly 10-arcsec in diameter, with a broad tail, about 25-arcsec long toward north-west. 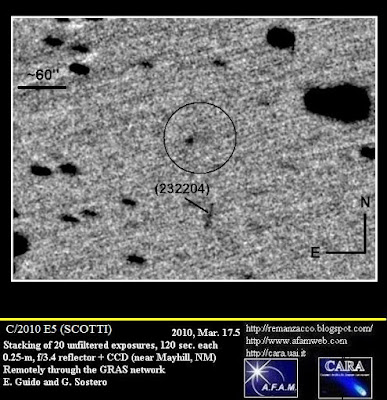 This is the 43rd comet for Spacewatch and the 5th for Scotti.

IAU circular No. 9124 issued on 2010, March 12, announces the discovery by G. J. Garradd of a comet on CCD images taken with the 0.5-m Uppsala Schmidt telescope in the course of the Siding Spring Survey. After posting on the Minor Planet Center's 'NEOCP' webpage, other observers have noted the cometary appearance of this 18.5 magnitude object, designated C/2010 E1 (GARRADD). 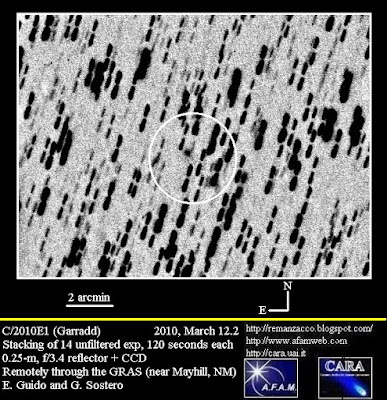 According to COCD webpage this is the 15th comet for Garradd, and the 68th comet for the Siding Spring Survey.

IAU circular No. 9125 issued on 2010, March 13, announces that an apparently asteroidal object reported by T. Glinos on CCD images taken with a 0.64-m f/7.2 Ritchey-Chretien telescope at the Jarnac Observatory (observers listed as D. Levy, W. Levy, and T. Glinos) has been found to show cometary appearance by other CCD astrometrists. Moreover the MPC was also able to link observations of the Mt. Lemmon Survey obtained on Feb. 17, 2010.

We have been able to follow-up this object remotely, through the GRAS network, using a scope located in Mayhill (NM). Below you can see our image taken on 2010, March 13.3, co-adding of 10 unfiltered exposures, 120-seconds each obtained by means of a 0.25-m, f/3.4 reflector + CCD: 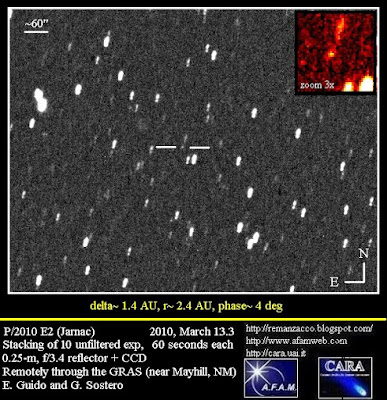 This is the first amateur discovery in 2010!!

A new bright sungrazing comet has been discovered in the images of SOHO spacecraft. The comet is probably a member of the Kreutz sungrazer family and probably will not survive this close encounter with the Sun.

The comet is now visible in the images taken by LASCO C3 & C2 cameras of SOHO spacecraft. In the same animation, spanning roughly 12-hours, there is the comet, the planet Mercury and a coronal mass ejection (CME) :

Upon closer inspection of the SOHO images it was found that this comet was part of a series of at least four comet fragments following the same trajectory. All the comets are highlighted in this video:


Anyway as expected, these sungrazing comets have not survived the close encounter with the sun.

by Ernesto Guido
Pubblicato da Team a 10:21 PM No comments:

According to Cbet No.2199 issued on March 11, 2010, the symbiotic star V407 Cyg is undergoing an apparent unusually bright outburst (mag 7.4). The outburst has been detected by Koichi Nishiyama (Fukuoka, Japan) and Fujio Kabashima (Saga, Japan) by means an unfiltered CCD image taken on Mar. 10.797 UT using a105-mm camera lens + CCD. (independent discovery of this outburst by Tadashi Kojima).

Coordinates extracted by our images:


Our image. Click on it for a bigger version: 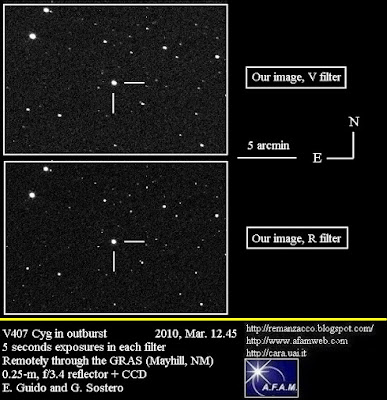 Here you can see a gif animation showing a comparison between one of our images of V407 Cyg Outburst and an archive DSS plate. Our image is a 60sec exposure, unfiltered obtained on March 12, 2010. The DSS is an image of 11 September 1990 (R Filter).

The usual V407 Cyg observed range is magnitude 13 to fainter than 17; it may have been a slow nova in 1936, and a Mira-type variable appears involved with this object, as well. This brightening is well outside its previously stated range and may indicate a nova outburst in progress.

According to the AAVSO: "Suggested classifications for this source include slow nova with either a Mira secondary or Mira component, or a symbiotic star. Spectroscopy and multicolor photometry may provide more information on the nature of this system, while visual observations and time-series photometry will be needed for tracking the overall light evolution of the system"


Spectra indicates that the object is indeed undergoing a nova outburst, in a symbiotic environment!! A scenario reminiscent of the symbiotic recurrent nova RS Oph.

According to Cbet 2204, U. Munari et al. (INAF-ANS coolaboration) report that they obtained absolutely fluxed, low-resolution spectra of V407 Cyg. The spectral appearance is a highly peculiar one. The spectrum is completely different from those ever recorded for this object and other symbiotic Mira variables in outburst. The white dwarf companion to the Mira variable is experiencing an outburst similar to that of classical novae, and its ejecta are moving in the circumstellar environment already filled by the ionized wind of the Mira.

Imamura-san's spectrum (Okayama U. of Sci.) : 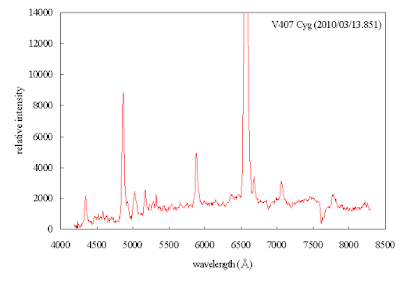 Our last glance at comet 67P for a while

Periodic comet 67P/Churyumov-Gerasimenko, has greatly attracted the attention of the astronomical community, after the re-scheduling of the European Space Agency "Rosetta" mission toward it (http://www.esa.int/esaMI/Rosetta ).

After its perihelion passage, on February 28th, 2009, comet 67P has decreased its brightness, and moved toward solar conjunction. Currently it's observable again in Virgo. The main difficulty is due to its faintness (according to the ephemerids it's about m1= 19). On 2010 March 8th, we tried to perform some follow-up about this comet through the Grove Creek Observatory-Skylive network (near Trunkey, Australia). The sky conditions were good (stellar FWHM about 1.5 arcsec), with a stellar limiting magnitude on the final stacking close to 21.

At the expected coordinates, we found a faint (unfiltered CCD magnitude about 20.5) target that was and moving in good agreement with the ephemerids proper motion. In our stacking, it has a stellar aspect (details on image below. Click on the image for a bigger version): 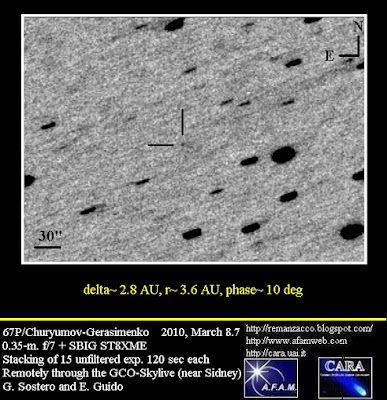 According to the IAU-Minor Planet Center, "Dates Of Last Observation Of Comets", it was last observed on 2009 June 26, by the Observatorio Nazaret, of G. Muler (MPC#J47, Lanzarote, Spain).

Goodbye 67P, looking forward to you in May 2014, time of arrival of the Rosetta probe in yours vicinity.

A bright fireball has been seen over Hungary aroud 23:24 local time (22:24 UT) of February 28, 2010. The meteor was spotted from Slovakia and Southern Poland too. Many surveillance cameras have recorded the night-landscape illuminated by the fireball.

The following one is the best video (taken by another CCTV camera) available at present showing the bright fireball in the sky:


Here you can find other videos related to this fireball uploaded on youtube:


by Ernesto Guido
Pubblicato da Team a 4:03 PM No comments:

The return of periodic comet 10P/Tempel

According to the ephemerids, comet 10P/Tempel is expected to reach (about) magnitude +8 next July. Currently 10P is visible (with some difficulties) in the early morning sky, pretty low in the south-east horizon, within the constellation of Serpens.According to the Minor Planet Center ephemerids, it's currently supposed to have an m1 of about 13.5; however in our images (details in the caption) this object is a modest target: 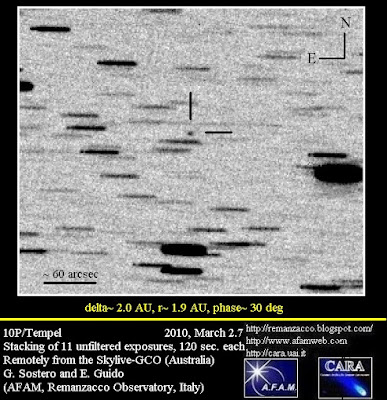 We measured it at (unfiltered Red) magnitude nearly 18, with a tiny coma of about 15 arcsec in diameter. Image enhancement techniques didn't provide any appreciable extent to the measured coma. One possibility is that, like other short period comets, 10P will develope an appreciable coma when it will get closer to the Sun (currently it's beyond the orbit of Mars, at about 2 AU from our star). Obviously we cannot rule out the hypothesis that the moonlight disturbance and/or the low altitude of the object on the horizon might have compromised the detection of a faint external coma (in spite of the fact that the sky was pretty clear and transparent).

The Afrho parameter (proxy of the dust abondance within the coma) currently is about 15 to 20 cm, like other short period comets at this distance, prior to their perihelion. Finger crossed for a neat binocular comet next summer.