According to its absolute magnitude (H=27.6) this asteroid has an estimated diameter of roughly 8-18 meters, so it is very small. We have been able to follow-up this object few hours ago remotely from the GRAS Observatory (near Mayhill, NM) through a 0.10-m f/5 reflector + CCD.

Below you can see a single 120-seconds exposure showing the object as a ~11-arcminutes trail (due to its fast speed). Click on the thumbnail to see a bigger version: 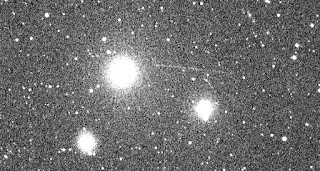 While this is an animation showing the object moving among the field stars. Each image was a 120-second exposure. Click on the thumbnail to see a bigger version:

While there is no cause for concern, this is one of the closest approaches recorded. The table below shows the top 20 closest approaches by NEOs (Near-Earth Objects) sorted by nominal distance. The table has been computed on the NASA/Neo-JPL website (the event that took 2008 TC3 into the earth's atmosphere is not included). Click on the thumbnail to see a bigger version: 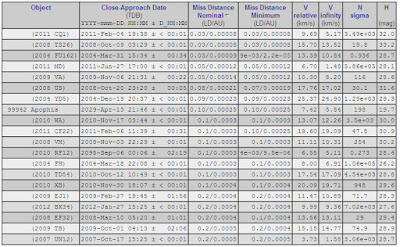 Below you can find a selection of some of the comets we imaged in the last 2 weeks using the 2-meter telescopes of Faulkes (F65 & E10 MPC codes) and the La Palma-Liverpool (J13 MPC code). Click on each image for a bigger version.

Prompted by an alert of A. Diepvens on comet-images mailing list, on January 03 we perfomed some follow-up of C/2010 G2 (Hill); we confirm that this comet was experiencing a bright phase. Co-adding of 9 unfiltered exposures, 15 seconds each, obtained remotely from the Siding Spring-Faulkes Telescope South on 2012, January 03.46 through a 2.0-m f/10.0 Ritchey-Chretien + CCD  reveals the comet as a bright featureless star-like object of magnitude 13.2 N 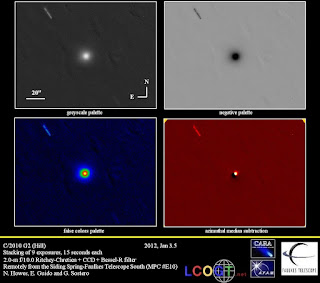 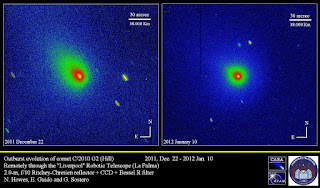 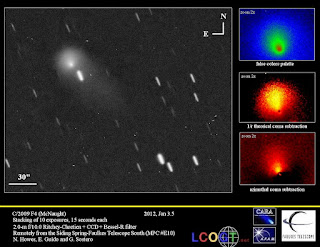 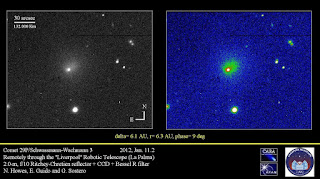 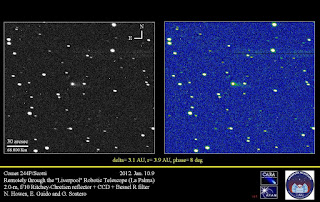 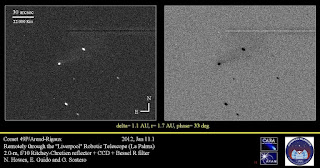 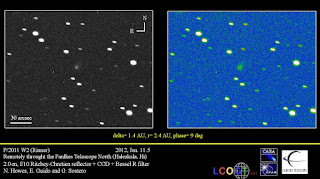 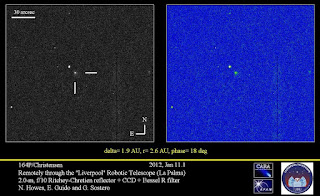