During the 2-month period November through December 2018, 10 new comets were discovered, cometary activity was detected for 1 previously discovered object (earlier designated as asteroids) and there was 1 comet recovery. Moreover an apparently asteroidal object with nearly-parabolic orbital elements was discovered. No cometary activity has yet been confirmed, but it has been given a cometary style A/ designation. "Current comet magnitudes" & "Daily updated asteroid flybys" pages are available at the top of this blog (or just click on the underline text here). See below for the "Other news" section.


The dates below refer to the date of issuance of CBET (Central Bureau Electronic Telegram)  which reported the official news & designations.

* MPC inadvertently assigned it the minor-planet designation 2018 VN_2 by mistake.


** No cometary activity was detected at discovery, but it was given a cometary style A/ designation. On December 16, CBET 4582 reported that a faint coma had been detected in images taken with the CFHT at Mauna Kea on December 8.


*** Nearly simultaneous independent discoveries of a comet were reported on Nov. 27 via CCD images taken by H. Groeller (with the Catalina Sky Survey 0.68-m Schmidt telescope) and by B. M. Africano (with the Mount Lemmon 1.5-m reflector). G. V. Williams notes that Africano reported the object first, and that the object was posted on the Minor Planet Center's NEOCP webpage before Groeller's report arrived.  The Central Bureau received Africano's report at around Nov. 27.55 UT, or 21 minutes before Groeller's report was received. 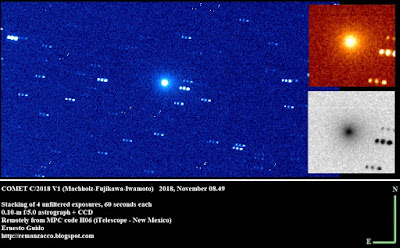 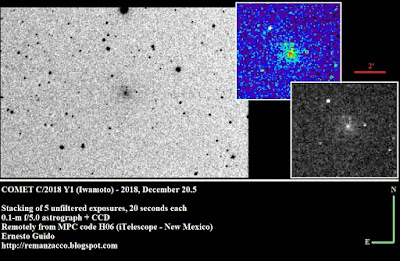 Further to CBET 4442, the following permanent numbers have been assigned to short-period comets based upon their being securely observed at multiple returns to perihelion.

Dec 03 Dec 03 NASA’s Origins, Spectral Interpretation, Resource Identification, Security-Regolith Explorer (OSIRIS-REx) spacecraft completed its 2 billion-kilometer journey to arrive at the asteroid Bennu Monday. The spacecraft executed a maneuver that transitioned it from flying toward (101955) Bennu to operating around the asteroid. This series of images below, taken by the OSIRIS-REx spacecraft, shows Bennu in one full rotation from a distance of around 580 km. The spacecraft’s PolyCam camera obtained the 36 2.2-millisecond frames over a period of four hours and 18 minutes. 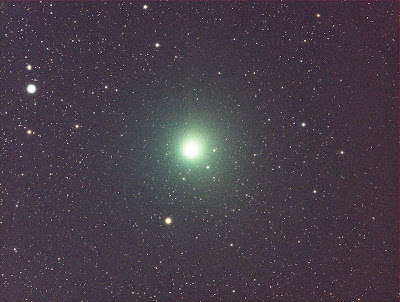 by Ernesto Guido
Pubblicato da Team a 6:03 PM No comments: