Comet C/2007 N3 (LULIN) is moving closer to Earth. At closest approach (0.41 AU) on February 24th, the comet may be as bright as 4th magnitude becoming a naked eye object.

We imaged Comet Lulin on 16 January 2009 and on 17 January 2009 to show its motion on the background stars. Below you can see the animation composed of 2 stacks of 5X120 seconds each, taken remotely from Mayhill (NM) through a 0.10 f/5 reflector + CCD (click on it for a bigger version):

We observed this comet while it was emerging from the morning twilight, in Ophiucus. The observation has been performed remotely, through the GRAS scopes network, from Mayhill (NM) on 2009 Jan. 8.5 (details on image, click on it for a bigger version): 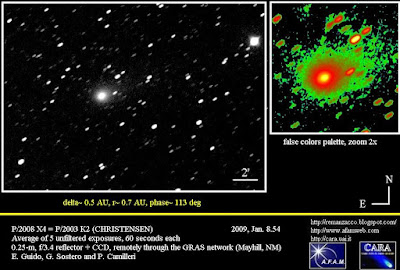 In our stacking the comets show a nice coma, elongated toward North-West, about 3 arcmin in diameter. Image processing through an azimuthal median subtraction routine, show the presence of a fan-like feature in solar direction, about 2-arcmin long, likely originated by the activity of the nucleus facing our star:

by Ernesto Guido, Giovanni Sostero and Paul Camilleri
Pubblicato da Team a 11:17 AM No comments:

This interesting object has been discovered on 2009 Jan 03 by the Italian amateur Fabrizio Tozzi, remotely through the Sierra Stars 0.60-m reflector, and confirmed at first by himself, using other remotely controlled scopes of the "Skylive" network, located in Sicily and Australia.

The preliminary orbital elements available published on MPEC 2009-A48 report e~0.5, a~4.6 and Incl.~ 26 deg; this is a very comet-like orbit! The object passed perihelion on July-August 2008, and at the moment of discovery it was located in Orion, at about magnitude 18.

We performed some follow-up of it while it was posted in the NEO-CP webpage; in our stacking (20 x 120 sec unfiltered exposures) we cannot distinguish any coma and/or tail, the FWHM of 2009 AU1 being very similar to that of the nearby field stars.

Our image is available here:
http://tinyurl.com/77hwuj

Anyway congratulations to Fabrizio for his interesting find.

by Ernesto Guido, Giovanni Sostero and Paul Camilleri
Pubblicato da Team a 9:45 AM No comments:

Discovered on July 11 2007 at Lulin Observatory, comet C/2007 N3 will reach perihelion on January 10, 2009 and will pass 0.41 AU from Earth on 2009 February 24. This comet is just emerging from solar glare and so it's better placed for viewing in the morning sky. The most recent visual magnitude estimate shows it at magnitude 7.5

According to predictions, Comet Lulin may be as bright as 4th magnitude in late February when in Virgo, rapidly becoming visible in the evening sky.

This comet is actually showing a nice sunward pointing dust tail (antitail) along with a ion tail. 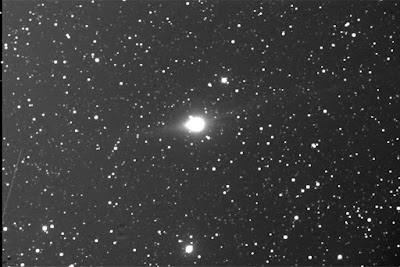 2004 XA192 has a period of 321 years and at present it's located at roughly 36 AU from the Sun. The MPEC reports a magnitude for this object around 19 on 22 December 2008, a relatively bright value for a TNO and within reach of amateur telescopes.

2004 XA192 is the faint object just above the bright star in the centre of the image (see below for a zoom of the animation):

- The Solar System Beyond Neptune (The University of Arizona Press - 2008)
Pubblicato da Team a 5:17 PM No comments: