Another Impact Flash on Jupiter

On August 20, 2010 a new optical flash has been observed on Jupiter. This is the third time in only 13 months that such events have been observed on the surface of this giant planet. Previous events occurred on July 19, 2009 and June 03, 2010. All these signs of impact have been recorded by amateur astronomers.

Masayuki Tachikawa, amateur astronomer from Japan, first reported his detection of the flash on August 20, 2010 at 18:22 UT with a Philips ToUcam Pro II attached to his 6-inch (150-mm) Takahashi TAO-150 f/7.3 refractor. Below you can see the detection image and the video showing the flash.

After the announcement by Tachikawa, another amateur astronomer from Japan, Aoki Kazuo, looking back at his Jupiter data taken independently, found what is the confirmation of the flash. In this case the two observers were separated by roughly 800 km, so Earth and its surrounding can be rule out as cause of the flash. These flashes are likely from meteors or small asteroid impact (~ less than 10 meters).

Like the event of June 03, this fireball did not produce any visible scar on the surface of Jupiter. (while the July 2009 event was detected just for the scar it left on Jupiter surface, due to a bigger impactor).

Thanks to their skill and new video cameras available on the market, amateur astronomers are now able to record short exposure videos necessary to detect these short-live events. It's now time to establish a worldwide network of telescopes to monitor Jupiter 24/7 to determine the current impact rate.

We found the comet on our first attempt to locate it on August 15, 2010. It was moving roughly 6 arc-minutes away from the nominal position at magnitude 19 (roughly 1 magnitude dimmer than predicted). We imaged it remotely, through the GRAS network, using a scope located in Mayhill (NM): 0.25-m, f/3.4 reflector + CCD. 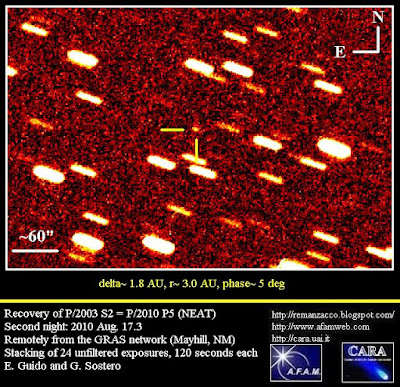 According to the IAUC, the indicated correction to the prediction by B. G. Marsden on MPC62880 is Delta(T) = -0.33 day. The linked orbital elements by G. V. Williams and an ephemeris appear on MPEC 2010-Q08.

The Perseid 2010 peak was expected on the night of August 12-13 between 18h and 07h UT with a ZHR (Zenithal Hourly Rate) of ~100 meteors per hour. (ZHR is a number that assumes a dark sky and the shower radiant at the zenith).

According to the first and preliminary results published on the IMO website, the observed ZHR maximum has been around 80-90 Perseids per hour in good agreement with the previsions of the dust stream models. The Perseid meteor shower is associated with the comet 109P/Swift-Tuttle. When the dust particles, spread out all along its orbit by this comet, strikes Earth's atmosphere, we see Perseids in the sky. The ZHR change accordingly to the Earth passing distance to the nearest comet dust trails and to its density. (the Perseid 2009 had a ZHR ~200)

While the ZHR is decreasing, this meteor shower is not over yet and will last for the next few days.

Below you can find a meteor composite image (because the images were collected over several hours, the radiant of the shower is spread out) + animation. The images have been collected by our meteorcam located in Castellammare di Stabia (Italy) from 21h UT of August 12, 2010 to 03h UT of August 13, 2010. Most of this meteors are Perseids. 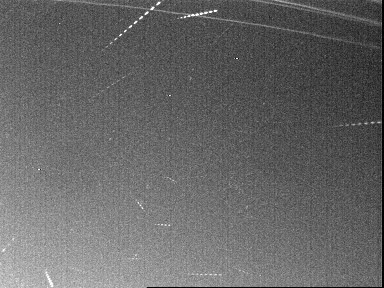