On 2019 June 22.40, the Atlas Project Survey (T08 Mpc code) found a small asteroid that was soon after put on the NEOCP list with the provisional designation A10eoM1 for the follow-up by other observers. The Minor Planet Center subsequently assigned the following official designation to this object 2019 MO (see update below).

Davide Farnocchia at JPL noticed "that the T08 NEOCP observations could generate an impact prediction matching the observed point and time on the earth of a fireball recorded on June 22 at about 21:30UT.  That led to an orbit - this is where A10eoM1 would have been,  based on the four ATLAS observations and assuming it really was this particular impactor - good enough to do precovery searches through the PanSTARRS data (F52 Mpc code)." (via Bill Gray, private communication).

Below you can see the event as captured by the GLM  (via F. Lucena) 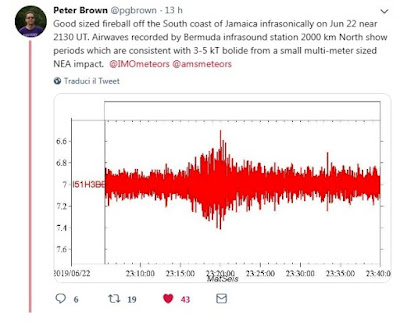 This is only the fourth time in history that an impacting object is observed prior to atmospheric entry. The first time it happened was with asteroid 2008 TC3, the second was with asteroid 2014 AA, the third was 2018 LA that impacted Earth on 02 June 2018. Another space impacting object discovered prior to its to atmospheric entry was WT1190F but it is thought to have been a space debris, possibly  the translunar injection module of Lunar Prospector. For more info about 2008 TC3, 2014 AA and 2018 LA see also:

The UHIfA (Institute for Astronomy - Univeristy of Hawaii) press release about 2019 MO is online on their website describing their effort to locate Pan-STARRS 2 (PS2) precovery images of the asteroid following Farnocchia's advice: "Luckily, the Pan-STARRS 2 (PS2) telescope on Haleakalā was operating at the same time, and two hours prior to the ATLAS observations had imaged the part of the sky where 2019 MO should have been seen. The asteroid was located on a part of the PS2 camera that is not fully operational, but PS2 scientists Robert Weryk and Mark Huber, at the University of Hawai'i Institute for Astronomy (IfA) and Marco Micheli at the European Space Agency (ESA), were able to analyze these PS2 images and find the asteroid."

This impact event has been added to CNEOS "Fireball and Bolide Data" webpage with a calculated total impact Energy of 6 kt (impact energy of the event in kilotons of TNT) on 2019-06-22 at 21:25:48 (event's peak brightness). According to P. Brown: "Energy of 6 kT compares well with earlier infrasound estimate. NEA was 5m in diameter with a mass of about 200 T. This is statistically the largest annual impactor at Earth".

The trail at the centre of the image below is the earliest known detection of 2019 MO. The image was obtained by Pan-STARRS2 telescope at 07:54 UT of the impact day, 13.5 hours before the object entered into Earth's atmosphere. (via ESA's SSA-NEO Coordination Centre).

by Ernesto Guido
Pubblicato da Team a 3:39 PM No comments: