Following the posting on the Central Bureau's Transient Object Confirmation Page about a possible Nova in Sgr (TOCP Designation: J17522579-2126215) we performed some follow-up of this object remotely through the 0.10-m f/5 reflector + CCD of ITelescope network (MPC Code - H06).

On our images taken on June 27.3, 2012 we can confirm the presence of an optical counterpart with R-filtered CCD magnitude 8.9 at coordinates:

Our annotated confirmation image. Click on it for a bigger version: 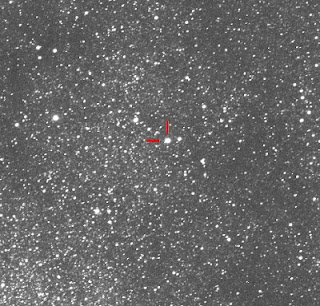 An animation showing a comparison between our confirmation image and the archive POSS2/UKSTU plate (R Filter - 1996). Click on the thumbnail below:


According to Cbet 3156, this variable has been designated NOVA SAGITTARII 2012 No. 3. This nova was discovered by K. Itagaki (Yamagata, Japan) on an unfiltered CCD image taken on June 26.5494 UT with a 0.21-m reflector (mag 10.3). Spectra obtained by different observers (K. Imamura; H. Maehara; C. Buil; U. Munari) suggests that this nova is of theHe/N type, with hydrogen Balmer and He I in strong emission.

2012 LZ1 is a large Near-Earth Object (NEO) approximately 300-700 metres in size (H=19.7) and it has been classified as a PHA (Potentially Hazardous Asteroid). PHA are asteroids larger than approximately 100m that can come closer to Earth than 0.05 AU. None of the known PHAs is on a collision course with our planet, although astronomers are finding new ones all the time.

Below you can see a 10-second exposure of  2012 LZ1 obtained with the FTN. The asteroid is slighlty trailed in the image due to its fast speed. Click on it for a bigger version. 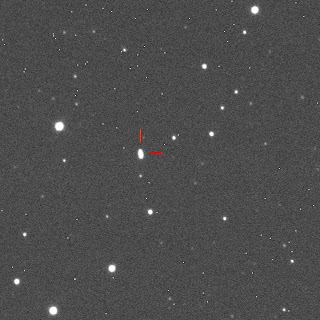 Below you can see an animation showing the motion of 2012 LZ1. Each frame is a 10-second exposure through the FTN 2.0-m telescope. Click on the thumbnail to see a bigger version:


Using the planetary radar system at Arecibo Observatory, astronomers have determined that asteroid 2012 LZ1 is twice as large as originally estimated based on its brightness, and large enough to have serious global consequences if it were to hit the Earth. However, a new orbit solution also derived from the radar measurements shows that this object does not have any chance of hitting the Earth for at least the next 750 years. Scientists at Arecibo observed the asteroid on June 19, 2012, to measure its orbit more precisely and to determine its size, rotation rate, and shape, and found it to be about 1 kilometer (0.6 miles) in its largest dimension. The new size determination suggests that 2012 LZ1 must be quite dark, reflecting only 2-4% of the light that hits it.

On 2012, May 29 we started an observing session to recover the periodic comet P/1994 X1. We found an object of magnitude ~19.5 located ~35 arcsec south-west  of the nominal position, along the line of variations (LOV). Stacking of 7 R-filtered exposures, 60-sec each, obtained remotely, from the Haleakala-Faulkes Telescope North on 2012, May 29.6, through a 2.0-m f/10.0  Ritchey-Chretien + CCD, under good seeing conditions, shows that comet P/1994 X1 appears slightly diffuse, with a tiny coma about 3" in diameter, having a total m1 magnitude measured through a Bessel-R filter of about 19.5.

Below you can find our recovery image of 2012, May 29.6 (click on the image for a bigger version) 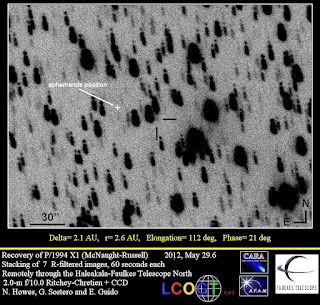 Below you can find the recovery image of 2012, May 30.4 (click on the image for a bigger version) 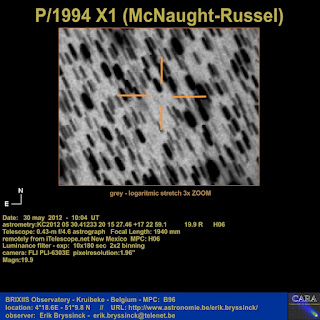 While below you can see a small animation showing the movement of this faint comet on May 30.4 (click on the thumbnail to see the animation):