Phaethon is an Apollo type asteroid with many peculiarities. It has been discovered in 1983 by Green and Davies while searching images of IRAS satellite. So it is the first asteroid to be discovered by a spacecraft. Moreover the orbit is unusually short (P 1.59 yr) with a small perihelion distance of q= 0.141 AU.

In 1983, Fred Whipple identified Phaethon like the parent of Geminid meteor stream. But it has never displayed unambiguous cometary activity. Some people hold on to the opinion that Phaethon is a comet (or extinct comet), while other thinks that it is more an asteroid or the likely product of a breakup.

In a recent article has been suggested that planet-crossing object 2005 UD is dynamically similar to Phaethon and so that:

"3200 Phaethon, 2005 UD, and the Geminids are pieces of a main-belt comet precursor that disrupted, perhaps due to unsustainable internal gas"

Where main-belt comets are a new class of objects introduced by Jewitt& Hsieh in 2006. To say it with the words of Jewitt & Hsieh:

"Phaethon's true nature must still be considered an open question" 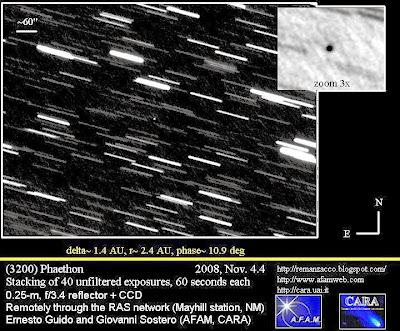 by Ernesto Guido and Giovanni Sostero

Today's APOD shows the impact train of 2008 TC3, captured in a video frame: 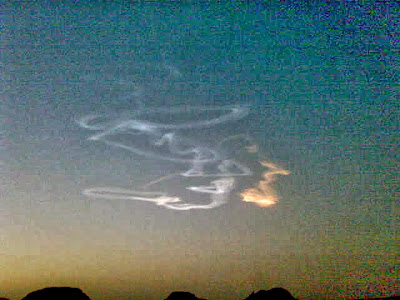 by Ernesto Guido
Pubblicato da Team a 10:25 PM No comments: