CBET 4594 (issued on 2019, January 08) announces the serendipitous discovery by the "Asteroid Terrestrial-Impact Last Alert System" (ATLAS) team of unusual activity associated with the inner main-belt minor planet (6478) which appears to have developed a lengthening tail or trail.

My follow-up image (click on it for a bigger version) 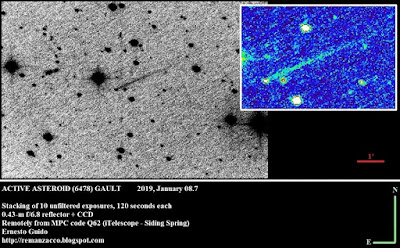 Asteroid (6478) GAULT was discovered on 1988, May 12 by astronomers Carolyn & Eugene Shoemaker at the Palomar Observatory in California. It was named for American planetary geologist Donald Gault:

The active asteroids represent a newly recognized class of small body in the solar system: their peculiarity lies in having both the orbital characteristics of asteroids, residing in orbits interior to Jupiter’s and having the Tisserand parameter substantially larger than 3, and the physical properties of comets, in the form of comae or tails.

The active asteroids have been referred to as ‘main-belt comets’ and ‘disrupted asteroids’ previously: the new designation is preferred both because some of the known cases are not located in the main belt and because the nature of the activity. Actually the causes of the activity are thought to be many and varied. As regards (6478) GAULT at this stage we can't rule out sublimation (or any other of the suggested mechanisms) in favor of an impact or viceversa. Hopefully more data will help sort out the cause of its activity. See the excellent David Jewitt's Active Asteroids webpage for more info about these fascinating objects and his paper "The Active asteroids" (The Astronomical Journal, 2012 March).