After posting on the Minor Planet Center's 'NEOCP' webpage, J. M. Aymani (Tiana, Spain) observing with a 0.25-m reflector + CCD, reported the dtection of a faint tail in PA 256 degrees.

We observed it remotely from Mayhill (NM) on 2008 Jun. 13.4, through a 0.25-m, f/3.4 reflector + CCD of the "Global Rent A Scope" network: in our stacking (co-adding of 42 unfiltered exposures, 60 seconds each) we could only appreciate that this object appeared slightly "soft" compared to nearby field stars of similar brightness.

Our stacking is available here (details on image):
http://tinyurl.com/47kwyk

Preliminary orbital elements published by the Minor Planet Center in M.P.E.C. 2008-L55 (http://tinyurl.com/5mtx5n) assumes that this object moves along a parabolic orbit (i= 25 deg, q= 2.5 AU); perihelion will be reached at the end of July 2008. According the current ephemerids, this comet will reach its maximum brightness next September (m1~ 17.2).

by Ernesto Guido and Giovanni Sostero
Pubblicato da Team a 8:52 PM No comments:

In our stackings it appears as a faint smudge of light (magnitude nearly 18). No coma or tail can be appreciated in our images, however it must be said that when we imaged it, the comet was merely 20 degrees above the horizon, nearly lost in the morning twilight, so we cannot exclude that under better observing conditions further details could be glimpsed.

61P belongs to the "Jupiter family comets" class, it completes its elliptic orbit (a~ 3.7 AU, e~ 0.43, i~ 6 deg) every 7 years. It will reach perihelion at the beginning of September 2008; however, it is not supposed to get significantly brighter than magnitude 15 (this maximum in its lightcurve will be reached at perigee, around the end of October 2008).

Updated orbital elements and ephemerids are available at the Minor Planets Center's website:

by Ernesto Guido and Giovanni Sostero
Pubblicato da Team a 9:55 PM No comments:

It is supposed to became a relatively easy telescopic object in a few months from now; perihelion will be reached on 2008, August 14, while perigee will occour few days earlier).


We performed some follow-up observations on 2008, June 9 (details on image; click on it for a bigger version): 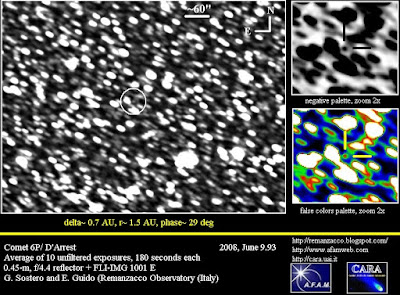 In our stackings it appears as a faint starlike object (red magnitude close to 18) while it moves in a very rich Milky Way's star field in Aquila. Due to the star crowding, it is nearly impossible to distinguish any potential weak coma, if present.

Another Possible Nova in Ophiucus

Following the posting on the Central Bureau's unconfirmed-objects webpage about another possible nova in Ophiucus, today we performed some follow-up of this object remotely through a 0.25-m, f/3.4 reflector + CCD, near Mayhill (NM).

Comparison with a UK Schmidt Telescope red plate, obtained on 1991, August 11 show nothing in this position (limiting magnitude near 20). See below our confirmation image (details are on the caption; click on it for a bigger version). 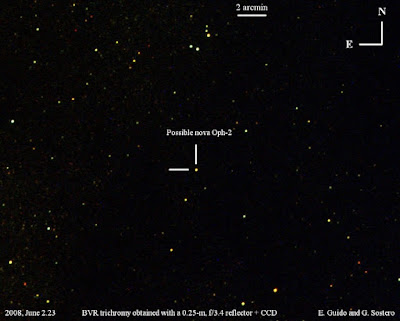