During the month of April 2017, 7 new comets were discovered. "Current comet magnitudes" & "Daily updated asteroid flybys" pages are available at the top of this blog (or just click on the underline text here). See below for the "Other news" section.

Apr 18 New paper on Arxiv by Julio A. Fernández et al.: "Physical and dynamical properties of the anomalous comet 249P/LINEAR"

by Ernesto Guido
Pubblicato da Team a 7:10 PM No comments:

I performed follow-up measurements of this object, while it was still on the neocp. Stacking of 10 unfiltered exposures, 120 seconds each, obtained remotely on 2017, May 29.4 from Q62 (iTelescope network) through 0.43-m f/6.8 reflector + CCD, shows that this object is a comet with a diffuse coma nearly 10 arcsec in diameter 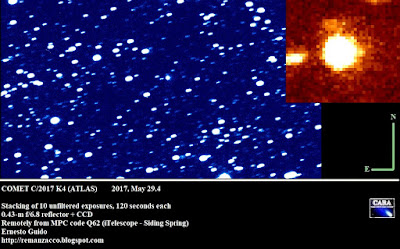 by Ernesto Guido
Pubblicato da Team a 8:41 PM No comments: