CBET nr.2714, issued on 2011, May 07, announced the discovery of a new comet (discovery magnitude 19.7) by the LINEAR survey through their 1.0-m f/2.15 reflector + CCD, on images obtained on 2011, May 04.2 The new comet has been designated C/2011 J2 (LINEAR).
After posting on the Minor Planet Center's 'NEOCP' webpage, this object has been found by several CCD astrometrists to show cometary appearance. We performed some follow-up measurements of this object while it was still listed in the NEO-CP, on 2011 May 05.5 and on May 06.5 remotely from the Tzec Maun Observatory.

After stacking nine unfiltered exposures, 300-sec each, obtained remotely on 2011, May 5.5 from the Tzec Maun Observatory (near Moorook, Australia) through a 0.15-m, f/7.3 refractor + CCD, we suspected the cometary nature of this object, since it appeared "soft". On a second, confirmatory, observing session (stacking of twenty-three unfiltered exposures, 300-sec each, obtained through the same instrumentation on 2011, May 06.5) we might confirmed our suspect of a tiny coma, since the FWHM of this object was measured about 40% wider than that of nearby field stars of similar brightness. 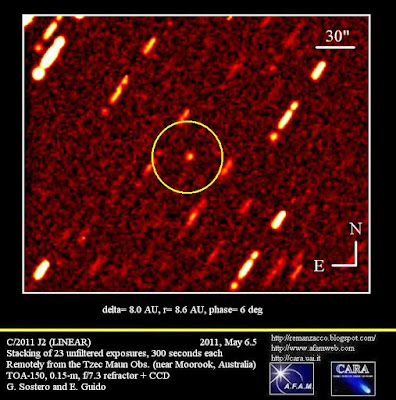 
According to COCD webpage, this is the 203th comet discovery for LINEAR Survey.