We performed some follow-up measurements of this object, while it was still on the neocp, with "Faulkes-Telescope South" on September 21, 2011.

Stacking of 3 R-filtered exposures, 120-sec each, obtained remotely, from the Siding Spring-Faulkes Telescope South on 2011, September 21.6, through a 2.0-m f/10.0 Ritchey-Chretien + CCD, shows that this object is a comet: diffuse coma nearly 6-arcsec in diameter. 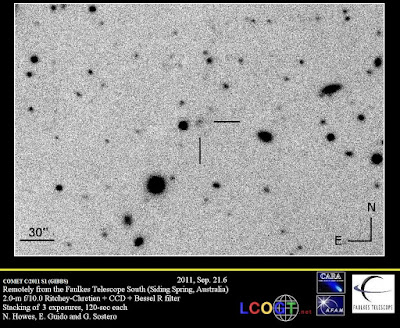