According to the CBET: "After two nights of observations of Grauer's comet had been received at the Minor Planet Center, T. Spahr realized that this object was identical with an object discovered a year ago by the LINEAR project (discovery observation tabulated below; cf. MPS 351583) that appeared to be a Jupiter Trojan minor planet."

We performed follow-up measurements of this object on 2 different nights, while it was still on the neocp.

Stacking of 6 R-filtered exposures, 60-sec each, obtained remotely, from the Siding Spring-Faulkes Telescope South by G. Sostero, I. Melville, A. Kasprzyk, N. Howes, E. Guido on 2011, Oct. 19.6, through a 2.0-m f/10.0 Ritchey-Chretien + CCD under good seeing conditions, shows that this object is a comet: sharp  central condensation, compact coma about 5" in diameter, and a wide, fan-shaped tail, at least 45" long toward PA 250

Stacking of 5 R-filtered exposures, 60-sec each, obtained remotely, from the Haleakala-Faulkes Telescope North by G. Sostero, N. Howes, E. Guido on 2011, Oct. 20.4, through a 2.0-m f/10.0 Ritchey-Chretien + CCD, confirms that this object is a comet: we found again a sharp central condensation, a compact coma about 6" in diameter, and a tail, at least 30" long, toward PA 247. 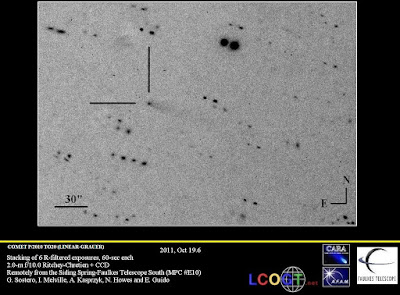