We performed follow-up measurements of this object on 2013 October 21.51.  Below you can see our image of this comet, stacking of 3x20-seconds unfiltered exposures, obtained remotely from MPC code H06 (iTelescope Observatory, New Mexico) through a 0.50-m f/6.8 astrograph + CCD + f/4.5 focal reducer. At the moment of the imaging session, the comet was just +16 degree above the horizon and the Sun was -11 degree. Click on it for a bigger version. 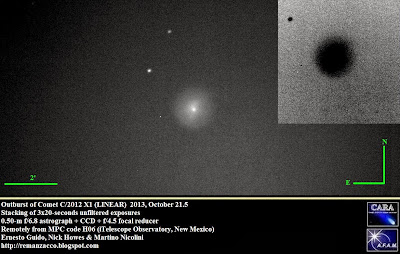 The comet shows a morphology similar to the outburst of comet 17P/Holmes in 2007: the C/2012 X1 disk-like coma diameter is about 105" and the sharp central condensation is ~15" across with magnitude ~11. 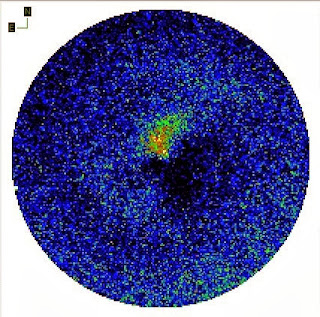 Below you can see the magnitude graph of C/2012 X1 (click on the image for a bigger version).