Cbet nr. 3713, issued on 2013, November 15, announces the discovery of an apparently asteroidal object (discovery magnitude ~19.4) by Michel Ory on CCD images obtained with a 0.5-m f/3 reflector at the Oukaimeden Observatory, Marrakech. The object has been found to show cometary appearance by CCD astrometrists elsewhere. The new comet has been designated C/2013 V5 (OUKAIMEDEN).

We performed follow-up measurements of this object, while it was still on the neocp. Stacking of 58 unfiltered exposures, 30-sec each, obtained remotely from MPC code Q62 (iTelescope, Siding Spring) on 2013, November 12.6 through a 0.43-m f/6.8 astrograph + CCD, shows that this object is a comet: diffuse coma about 10" in diameter elongated toward PA 300.

Below our confirmation image. Click below for a bigger version. 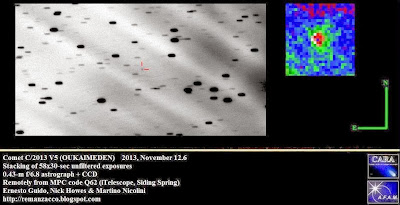 According to the preliminary ephemeris, comet C/2013 V5 (OUKAIMEDEN) could reach magnitude ~5.5 in mid-September 2014. Below you can see a graph generated using the software Orbitas and showing the predicted magnitude (in red) versus the elongation (click on the image for a bigger version). A word of caution: as always with comets, the future magnitudes reported here are only indicative.