We performed some follow-up measurements of this object on 2013, December 10.6, remotely from the Faulkes Telescope South (MPC code E10), through a 2.0-m f/10.0 Ritchey-Chretien + CCD (Faulkes Telescope is operated by Las Cumbres Observatory Global Telescope Network).

Below you can see our image taken with the asteroid at magnitude ~15 and moving at ~78.0 "/min. At the moment of the close approach 2013 XY8 will move at ~151"/min. Click on the image below to see a bigger version. North is up, East is to the left (the asteroid is trailed in the image due to its fast speed). 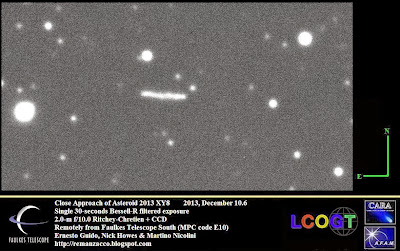 Below you can see a short animation showing the movement of 2013 XY8 (four consecutive 30-second exposure). Click on the thumbnail for a bigger version:

Any idea what the coordinates in the sky will be for its location?

Insert the date, the mpc code for the location and the asteroid designation 2013 XY8 to generate the ephemeris.