209P/LINEAR is a periodic comet discovered by the Lincoln Laboratory Near-Earth Asteroid Research (LINEAR) survey on five images taken on 2004, February 3.40 (discovery magnitude ~18.1). Reported by LINEAR as an apparent asteroidal object, it has been found to show a narrow 1'.1 tail in p.a. 274 deg (slightly expanding toward the end) on CCD images obtained by R. H. McNaught with the 1.0-m f/8 reflector at Siding Spring on Mar. 30.8 UT. This comet has been assigned the permanent designation 209P on 2008, December 12 (previous designation were P/2008 X2 (LINEAR) = P/2004 CB).

We performed follow-up measurements of this object on 2014, April 14.95 with the 2.0-m f/10.0 Ritchey-Chretien + CCD telescope of La Palma-Liverpool (J13 MPC code). You can see our image below with the comet a about magnitude ~17. (click on it for a bigger version). 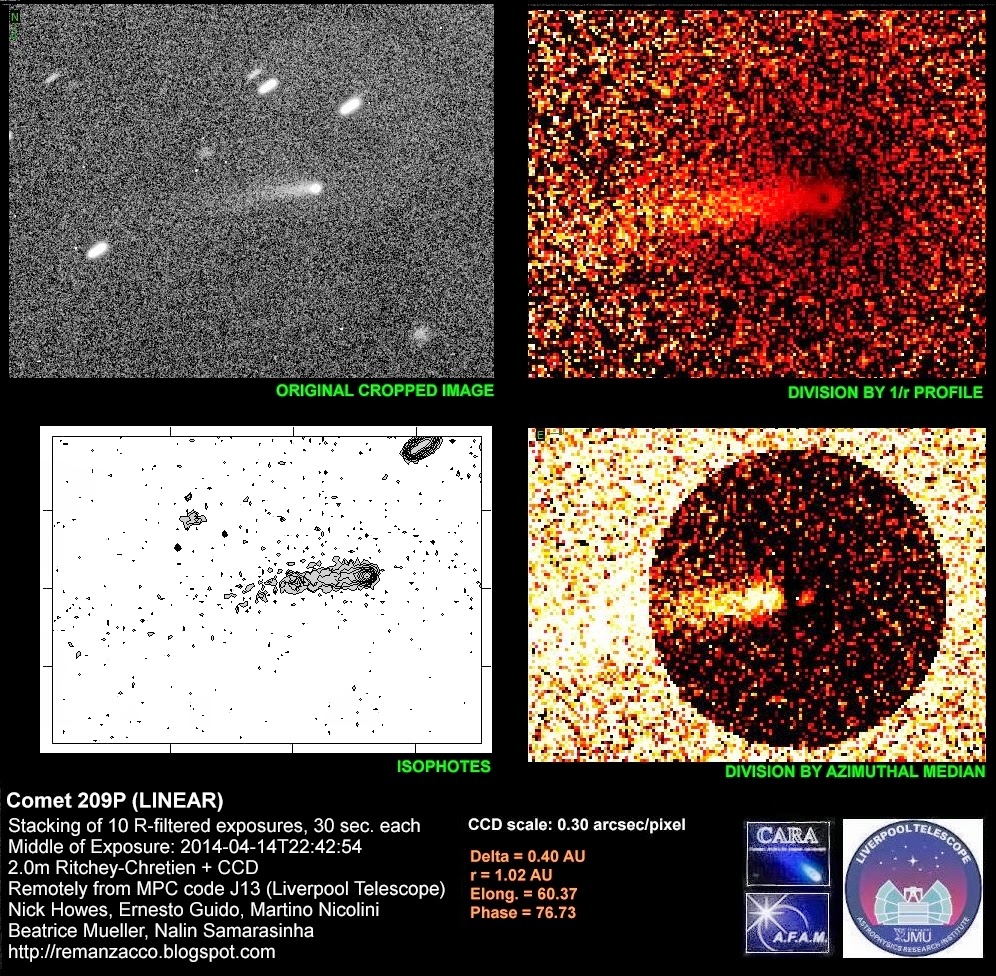 According to a prediction by E. Lyytinen and P. Jenniskens, comet 209P/LINEAR will possibly cause a big meteor shower on May 24, 2014. On May 29, 2014 this comet will pass just 0.055 AU from Earth or about ~8 million km (while the perihelion,  i.e. closest approach to the Sun, will be on May 6, 2014) making it one of the closest comet approaches in history. Comet 209P/LINEAR will be at magnitude ~10 around the time of the shower.

The main source of activity should become 1898-1919 trails, however some meteors could be produced by the earlier trails of the comet, down to 1763 trail, which is the oldest computed trail, and even earlier. The computed time of maximum activity is May 24, 2014, at 7:21 UT, theoretical radiant is RA=122.8, Dec=+79.0 (in the constellation Camelopardalis).

Exact timing and activity level is difficult to estimate due to the limited physical observations of this comet. The estimate of level of the shower is based on available photometric measurements of the comet. Estimates give a ZHR of 100/hr to 400/hr, which is an excellent outburst! But this shower can become an exceptional one. "Indeed, given the current orbit of the comet (from JPL HORIZONS ephemerids database), ALL THE TRAILS EJECTED BETWEEN 1803 AND 1924 DO FALL IN THE EARTH PATH IN MAY 2014!!!" As a consequence, this shower might as well be a storm.  Below you can see a graph with the location of the meteoroid stream ejected by the comet at the Earth in 2014:

According to the image below (showing the hemisphere of Earth that will be facing the incoming dust particles from Comet  209P/LINEAR when the activity peaks on May 24, 2014), skywatchers in southern Canada and the continental  U.S. will be especially well positioned to watch the sky show.

Below you can see the graph showing our Afρ results obtained analyzing our follow-up image of 08 May 2014. The Afρ parameter is  ~2 cm, a very low value that is in line with the results outlined in the Ye and Wiegert's paper with the comet that seems at present relatively depleted in dust production (click on the image for a bigger version). 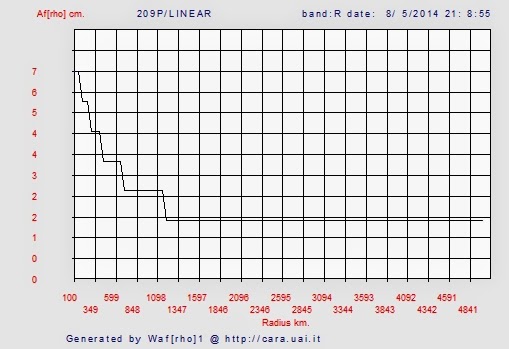 The image  below is showing the tail's position of comet 209P in relation to the Sun position (indicated by the S on the arrow in the yellow circle). 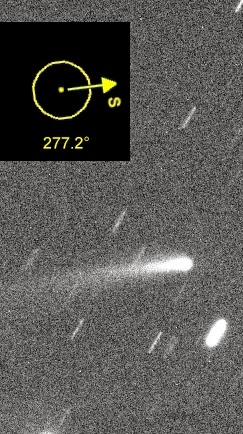