Asteroid 2015 TB145 has an estimated size of 290 m - 650 m (based on the object's absolute magnitude H=19.8) and it will have a close approach with Earth at about 1.3 LD (Lunar Distances = ~384,000 kilometers) or 0.0033 AU (1 AU = ~150 million kilometers) on 2015, October 31 at 17:01UT. This asteroid will reach the peak magnitude about +10 between on October 31. Radio astronomers will try to  observe it as the radar signal-to-noise ratios will be very strong "so this should be one of the best radar targets of the year.  We hope to obtain images with a range resolution as high as 2 m/pixel using DSS-13 to transmit and Green Bank (and possibly Arecibo) to receive. The flyby presents a truly outstanding scientific opportunity to study the physical properties of this object."

Moreover 2015 TB145 is in an extremely eccentric (~0.86) and high inclination (~40 deg) orbit.  It has a Tisserand parameter of 2.937 hinting that it may be cometary in nature. If so, then this would be the first time that the Goldstone radar has imaged a comet from such a close distance. The encounter velocity is 35 km/s, which is unusually high.

The graphic below depicts the orbit of asteroid 2015 TB145 (click on the image for a bigger version).

The graphic below depicts the passage of asteroid 2015 TB145 past Earth on October 31, 2015 (click on the image for a bigger version). 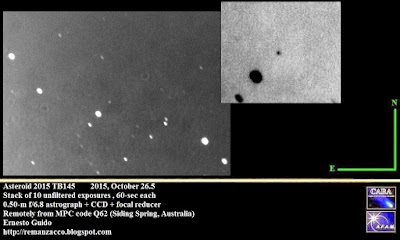 The chart below shows the path of asteroid 2015 TB145 as it sweeps past Earth at 35 km per second. "During this 20-hour-long period the asteroid's magnitude varies from 10.1 to 12.2, and its proximity to Earth will create a parallax shift of ½° or more. So you won't be able to point your telescope based on this track; instead, you will need to consult another source (for example the MPC website) to generate positions specific to your location" (click on the image for a bigger version). 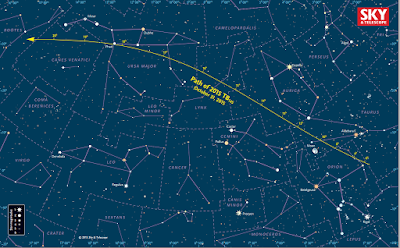 The radar images from Arecibo indicate the object is spherical in shape and approximately 600 meters (2,000 feet) in diameter and completes a rotation about once every five hours.

The animated GIF above was generated using radar data collected by the National Science Foundation's 305-meter (1,000-foot) Arecibo Observatory in Puerto Rico. The six radar images used in the animation were taken on Oct. 30, 2015, and the image resolution is 7.5 meters (25 feet) per pixel.

Radar images obtained at the Arecibo Observatory appear to rotate clockwise, which is noticeable by the movement of bright features. “The bright and dark features are indication of surface irregularities. For example, the central dark feature may be a large circular depression, possibly an impact crater”, commented Dr. James Richardson, USRA Scientist in the Planetary Radar Group.

Scientists observing asteroid 2015 TB145 with NASA's Infrared Telescope Facility (IRTF) on Mauna Kea, Hawaii, have determined that the celestial object is more than likely a dead comet that has shed its volatiles after numerous passes around the sun. Indeed researchers now estimate that its surface reflects only about 6% of the sunlight that strikes it (most comets have a reflectivity in the range of 3% to 5%, but asteroids are usually considerably higher, around 15% to 20%).

Below the new radar animation of asteroid 2015 TB145 obtained by the radar team of Arecibo Observatory on Nov 1, 2015.