On May 26, 2017 (between 19:24.6 and 19:26.2 Universal Time) a new possible impact flash on Jupiter was imaged by Sauveur Pedranghelu, a French amateur astronomer from Corsica. According to a preliminar analysis by Marc Delcroix (who runs a Jovian impact flashes detection project) this flash, detected in the North polar area of Jupiter, seems shorter than the others (~0.7s vs 1-2s) and displayed two brightness peaks. (click on the images below for a bigger version). 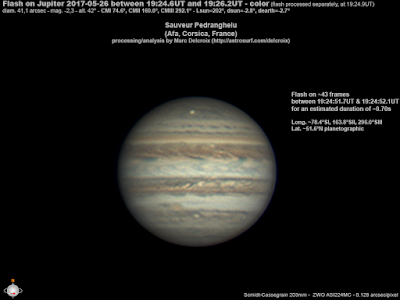 The image by Pedranghelu was then posted online as a call for observations of Jupiter obtained in the same time interval to exclude the possibility that the flare might have been caused by an artefact or flashing satellite. Few hours after the posting, two other observers from Germany (Andre Fleckstein & Thomas Riessler) confirmed independently from one another the finding with their own images. 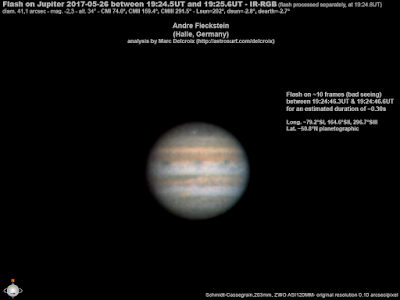 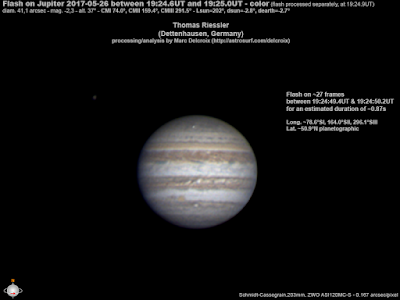 Below you can see an animation made by Thomas Riessler using his Jupiter observations showing the impact flash on Jupiter. (click on it for a bigger version). The impact area imaged in the hours after the reported flash showed NO remnants of the impact.

This is not the first time that we have seen something slam into Jupiter, beginning with a fireball recorded by Voyager 1 as it flew past in 1979 (see image below) and the famous impact of Comet Shoemaker-Levy 9 in 1994.

The role of planet Jupiter as a shield protecting Earth from getting hit by such objects is still controversial and it has been discussed in depth in a series of articles by Jonathan Horner and Barrie Jones (Jupiter - friend or foe?).