On February 06, 2018 at 20:45 UT, SpaceX successfully launched the Falcon Heavy, a reusable super heavy-lift launch vehicle, introduced as the most powerful rocket currently in operation.

The dummy payload for this test flight was a sports car owned by SpaceX CEO Elon Musk, a midnight cherry, first generation Tesla Roadster. It was selected as "something fun and without irreplaceable sentimental value" to be launched into space on the maiden flight of the Falcon Heavy rocket. The purpose of including the Roadster on the maiden flight was to demonstrate that the Falcon Heavy can launch payloads as far as the orbit of Mars.

Sitting in the driver's seat of the Roadster is "Starman", a dummy astronaut clad in a SpaceX spacesuit. He has his right hand on the steering wheel and left elbow resting on the open window sill. Starman is named for the David Bowie song "Starman". The car's sound system was looping the symbolic Bowie songs "Space Oddity" and "Life on Mars?". A copy of Douglas Adams' 1979 novel "The Hitchhiker's Guide to the Galaxy" is in the glovebox, along with a towel and a sign on the dashboard that reads "Don't Panic!" (two references to the book). 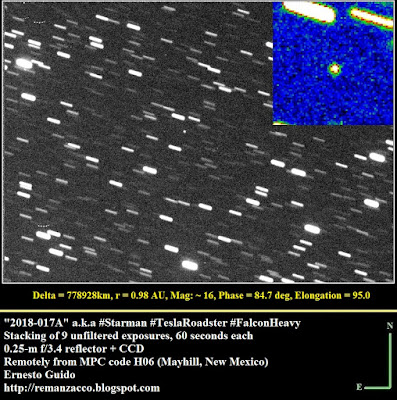 While below you can see a short animation showing the motion of Starman in about 20 minutes. Each frame is a 60-second exposure. North is up, East to the left.

In the hours after the successful Falcon Heavy launch, a live video feed of the Roadster and Starman from three cameras mounted inside and on booms attached to the outside of the vehicle was broadcast on YouTube. It was expected to last for about twelve hours until the on-board batteries were depleted; however, the livestream lasted for just over four hours. Full video stream of the car as it creates spectacular views of Earth from space is still available, see Youtube video below.