IAUC nr. 8939, issued on 2008, April 24, announces the recovery of P/1995 J3 = 1994k = 1994 XXVIII (Shoemaker), providing it the new designation P/2008 G2 (SHOEMAKER). It was picked up by T. Spahr, analyzing the astrometry of Apr. 10, reported by the Catalina Sky Survey (observer: R.A. Kowalsky, no comments about any potential cometary appearance) to the Minor Planet Center; linkage to further archive data of Apr.1 was provided by B. G. Marsden. The object was reported as having a magnitude of about 18.6.

We performed some follow-up of this comet on 2008, Apr. 24.9 from the Remanzacco Observatory (details on image; click on it for a bigger version): 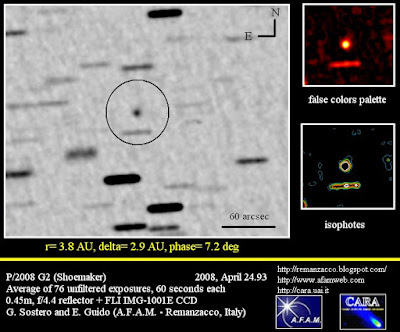 From our stacking we have evidence of a tiny coma, nearly 10 arcsec in diameter, possibly elongated toward North-West. The measured total magnitude is about 18.5 (R unfiltered).

Perihelion of P/2008 G2 (Shoemaker) will occur in April 2009. At that time the comet will have m1 nearly 17. The maximum brightness is expected to be just half a magnitude better, in August 2009, when the comet will mostly be a southern object.